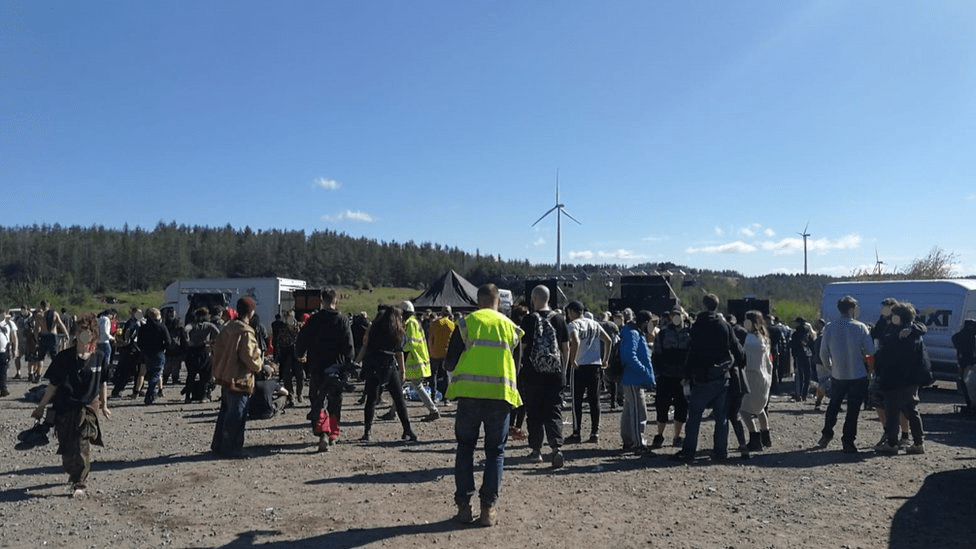 When a few thousand people descended on the small English village of Banwen last weekend for an illegal rave, an elderly couple was caught off guard but acted in the spirit of PLUR.

Rather than panicking about the 3,000 ravers who gathered for the unlicensed event near Brecon Beacons National Park, Mary and Baden Powell generously helped to keep them hydrated.

“I made them a cup of tea, filled their bottles of water for them,” Mary Powell said in a BBC video. “No problem.”

The Banwen resident said she didn’t know what was going on until she got up in the morning. “Well, where the heck have all these cars come from?” she thought.

Her son informed her that a rave was taking place on the mountain.

“They came in the middle of the night, you know, all the cars and things,” she said.

Her husband Baden said he saw “only two drunks” and that “they were sensible.”

“A red car pulled up, a little red car, two boys and they were tiny, had been sleeping in the car,” he said. “And they asked me if that’s alright. ‘Yes,’ I said.”

No PLUR From Police

While the Powells were friendly, South Wales police officers weren’t so much about Peace Love Unity Respect.

Authorities have fined eight organizers of the illegal rave last Saturday up to £10,000, under new legislation that the Welsh Government introduced last week to penalize people who throw large gatherings amid the coronavirus pandemic. Officers used drone footage to identify the organizers, which they believe numbered 22.

The rules were imposed because illegal raves are “the most serious breaches of social distancing restrictions,” Secretary of State for the Home Department Priti Patel said.

Metropolitan Police Federation chairman Ken Marsh said the new legislation “could be good for areas outside London.” However, it “means absolutely nothing” in London, he said, because “people just set up a music box in the middle of the street and say ‘it’s not mine.’”

Officers made arrests for driving under the influence of drugs and public order offenses including consuming drugs and urinating on streets. They also confiscated music equipment.

“Local communities have been trying really hard to adhere to coronavirus rules,” he said, “And to have 3,000 people come in and not adhere to it, is really irresponsible.”