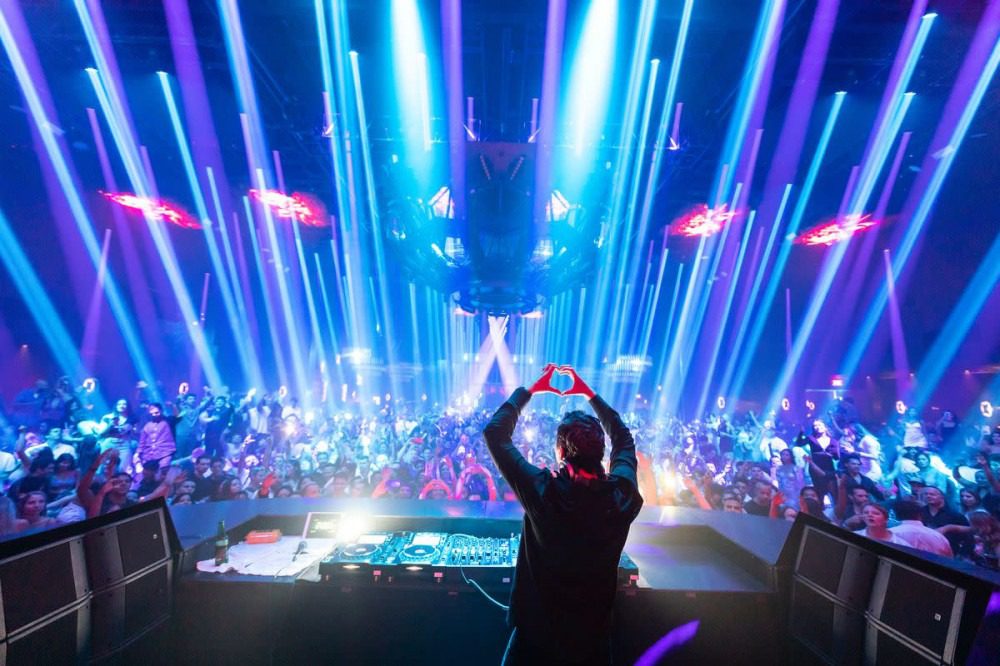 If the pandemic proved anything, it was that even the mightiest could fall.

Case in point was Las Vegas, a city whose economy was dependent on sin but suddenly found itself devoid of sinners. In March 2021, the number of visitors to Las Vegas dipped a staggering 49.5% compared to March 2019, according to the Las Vegas Convention and Visitors Authority.

But the numbers were only part of the story. If you visited Vegas during the pandemic, odds are you saw a shell of the hedonistic lotusland you once knew. Masks concealed the unbridled joy of a newlywed couple who hit blackjack; sanitizer stations replaced water fountains; and understaffed teams trudged around sticky, soda-stained casino floors under constant threat of being furloughed.

So when Zouk Group came around, Las Vegas was in a rut. But not for long.

Yes, that's a bold statement about the Las Vegas Strip's new kid on the block. But those who step inside Sin City's latest nightlife powerhouse will quickly realize there's a reason why Zouk's management team describes their production as a "living, breathing thing."

Zouk Group's headfirst dive into the U.S. nightlife market began last year with the grand opening of Resorts World Las Vegas, a $4.3 billion development helmed by Zouk and Resorts Worlds' shared parent company, Genting Group. The organization bet big on their ability to parlay their decades of success in Singapore into one of the most competitive entertainment markets in the world.

Due to the broader state of the Las Vegas market at the time, the development itself was naturally a noteworthy one. Resorts World was the first major addition to the Strip in 10 years, and it broke ground during one of the most debilitating and uncertain periods in recent memory.

Nonetheless, Zouk, who were named EDM.com's Best Event Organizer of 2021, has pressed on, undeterred. The company's entertainment footprint in Las Vegas began in 2021 with the advent of Ayu Dayclub, a breezy open-air venue that channels influences from the faraway beach clubs of Bali.

Since then, Zouk Group has only continued to prove that their future is far from a product of circumstance. With the organization's flagship venue, Zouk Nightclub, now fully operational, they're proving that their ambitions go well beyond the status quo.

"Zouk is not even just a club or a lifestyle brand in Singapore," Ronn Nicolli, Resorts World's Chief Marketing Officer, tells EDM.com. "It's essentially an institution. "We have a saying in the office that we're experience makers. The reality was every time I mentioned that I work for Zouk there was this excitement people had."

But the excitement is far from smoke and mirrors. Despite the pandemic's impact on Las Vegas' economy, Zouk Nightclub ultimately proved a quantum leap for the city's nightlife businesses from a technological standpoint. Upon entering the venue, it's immediately apparent that these "experience makers" are hellbent on disrupting the status quo.

When we visited the club in March 2022, it was clear that its architects had one goal in mind: to use technology to foster a sense of connection between artist and audience. With its giant visual fixtures that rotate and tilt in mid-air, and its captivating lighting capable of enshrouding every last corner of the venue in a kaleidoscope of color, Zouk Nightclub is immersive in every sense of the word. It's certainly easy to be awestruck by the flashiness of it all—so much so that you might not immediately appreciate the fact that there's not a blindspot in the house.

Considering the fact that Zouk Nightclub encompasses a sprawling 36,000 square-foot space and boasts a capacity of 2,160, this work of savvy structural engineering is no accident. And one's level of access, proximity to the stage, or deepness of their pockets are not factors that define the experience—a refreshing and inclusive approach antithetical to the moth-eaten Sin City nightclub blueprint.

The club's breathtaking centerpiece, a Jumbotron-like fixture affectionately dubbed "The Mothership," is one of its defining characteristics. It's essentially a mechanism designed for sensory overload, which houses a centrifuge of lasers and is able to freely traverse the venue like a spider silk-spinning a web across the ceiling. Designed by Barcelona’s Ledscontrol, "The Mothership" took six weeks to reconstruct above the club's dancefloor, according to Off The Strip.

They say, however, that ambition is the enemy of success. So when Zouk Group's empyrean club finally came to fruition, they suddenly felt the weight of precipitating a paradigm shift in the "Entertainment Capital of the World." Nicolli says he felt the pressure to uphold the company's best-in-class reputation in Singapore as they transitioned into the U.S. market.

"There was a lot of pressure to consider, 'How do I make sure that I can evolve this brand and bring it to Las Vegas while staying true to the heritage?'" Nicolli recalls. "There's also the reality that it's been seven years since a club opened up in Las Vegas with success."

Those lessons from the past became key data points, each partially sculpting the formation of Zouk as it exists today. Despite the club's industry-leading technology and its ambitious scale, the team believed their success hinged on first establishing two canons: crowd connectivity and inclusion.

"We look at production as a living, breathing thing. We talk to the artists' teams every week and it's not just about marketing," Nicolli says. "It's about guest journey, production, sales, and VIP experience."

Moreover, nights at Zouk are the type of experiences that the industry's top talent are eager to be a part of. The club's list of DJs is akin to the EDM version of the Met Gala, with Zedd, DJ Snake, Tiësto, deadmau5 and many more making up a corps d'elite of Las Vegas residents. Nicolli elaborates that these comprehensive conversations with the talent have been taking place since the earliest conceptual stages of the club.

"As the entertainment was coming to fruition, we also got their feedback," he explained. "That was a big part of it too, sitting with Zedd and Tiësto's teams and working on design, talking about the sound, lighting systems, and hearing what worked at their other shows in different markets. A big component was also the fact that our leadership team sat with all of these artists, which was something different and new. It really showed our commitment as a property that we were going to make this happen."

Ultimately, Zouk Group's ambitions to change the fabric of Vegas stem from a desire for continuous improvement. With well over a decade of experience in the city's nightlife sector, Nicolli explains that he's observed firsthand how the format of a regularly reoccurring club show is prone to a certain level of stagnation over time. To counteract this, the Zouk team seemingly thrives in a constant state of creative disruption.

"There's time to celebrate wins, but also there's also the ability for self-reflection," Nicolli says. "A lot of times that's the toughest part coming out of a weekend and wanting to pat yourself on the back. There is a sense of pride, but also time to consider, 'What can we improve even more on?"

For the stupefying Zouk Nightclub, raising the bar is a downright scary thought at this juncture. Its operators are cultivating the venue like Apple does with its iPhones: incomplete and iterative. Night in and night out, organizers are able to implement new approaches to the club's lighting mechanics, activate the world's top lifestyle brands in inventive ways, or lure unimaginable celebrities. We even saw Breaking Bad's Bryan Cranston and Aaron Paul take the decks.

On any given day, Zouk Group's properties offer something you've never experienced. And isn't that why we go to Vegas in the first place?

You can keep a pulse on Zouk Group and its events here.