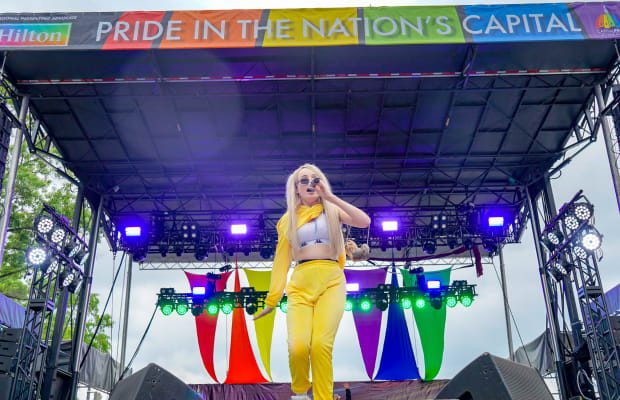 One positive element that the pandemic has provided the music industry has been the emergence and support of queer and transgender artists. The industry has predominantly been operated by men and there has been a serious inequality in pay, but now we're seeing more LGBTQIA+ people and women being promoted and making executive decisions at major music companies.

Among the artists that turned the industry on its head and skyrocketed their careers this year are Kim Petras, Shawnee Kish, and Quinn Christopherson.

As we close out 2021, these artists and songs continue to shape-shift music and lead us into the next era of sound.

Like a number of trends and songs in 2021, Kim Petras' "Coconuts" took off on TikTok after she performed on the MTV EMA awards. The playful and sensual track is about her breasts and how things are better in twos. If you've got it, flaunt it.

Quinn Christopherson won NPR's Tiny Desk concert back in 2019 with his track "Erase Me" and has been on the come-up ever since. He recently released his I Am Bubblegum on the Play It Again Sam label. The titular "Bubblegum" is a sultry alternative ballad that steers us through the vulnerabilities and struggles of being and finding who you are.

JORDY is a Los Angeles-based songwriter who was born in Chicago. He's had career-altering performances on the TODAY Show, Radio Disney, and The Tonight Show with Jimmy Fallon where he won the songwriting challenge. "If He's In Your Bed" tells the story of not sacrificing yourself for mediocrity because even if he's in your bed, you'll be bored.

Shawnee Kish is a powerhouse songwriter and vocalist with talents beyond what's available in mainstream music now. She has written songs for Disney Channel, toured with Swedish pop-rock duo Roxette and rock band Glass Tiger, and her song "Mirror Me" hit number one on Canada's National Aboriginal Countdown.

In addition to being a multi-talented musician, she is a motivational speaker who speaks about topics like youth mental health, self-identity, and Indigenous representation.

Joy Oladokun is a multi-instrumentalist based in Nashville, TN. She was the first member of her family to be born in America and spent time in Delaware, Arizona, and now Tennessee. Her father collected hundreds of records, which introduced her to everyone from Phil Collins, Peter Gabriel, King Sunny Adé, and Conway Twitty.

Oladokun's music has been used in hit TV shows like Grey's Anatomy, and The L Word: Generation Q. Oladokun's track "sunday" is a powerful tune that was released in part of her in defense of my own happiness album. She was also featured in The Sims' in-game music festival, Sims Sessions, earlier this summer alongside Bebe Rexha.

Oladokun's bio reads, "People are traumatized by words or uplifted and encouraged to change their lives and careers by them."