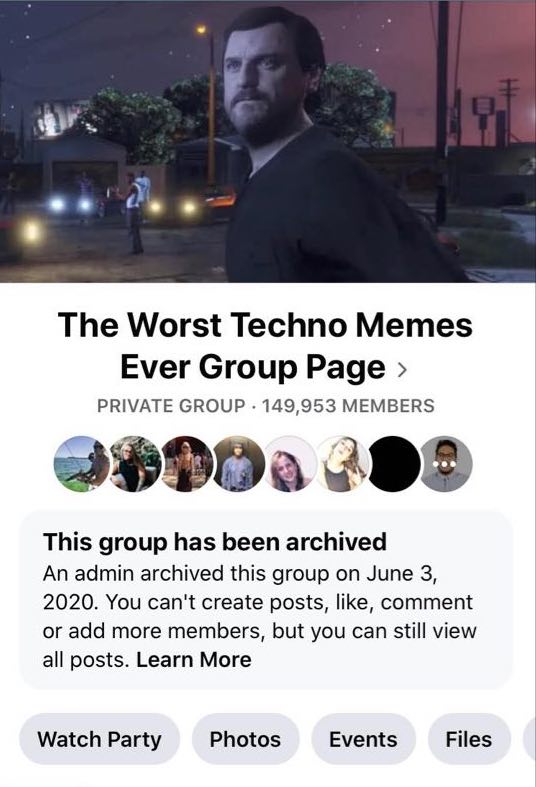 First, it was Tomorrowland Winter. Then, Ultra Music Festival, followed by EDC Las Vegas and pretty much any festival you could think of. Everything got canceled, postponed, or rescheduled due to the infamous Covid-19. But we still had a good share of fun, watching our favorite DJs performing gigs at home, and keeping ourselves entertained with the cringy yet witty memes from Facebook’s The Worst Techno Memes Ever Group Page (TWTMEGP). Last week, to our big surprise, we discovered that TWTMEGP was archived for unknown reasons. And, although the site was back up just a couple of days later, the techno community got worried that their only source of entertainment during these hard times was closed for good. What did this mean? Why was Facebook’s The Worst Techno Memes Ever Group Page down?

If you are not a member of this group, then you are definitely missing out on some of the funniest memes about the raving music scene. No DJ is spared: good or bad, if there’s anything funny about them, someone in the group would make a meme about it. Soon, a snowball of horribly accurate memes would come along. Crowd’s favorite picks are usually Solomun and his tech-house afterparties, or Nina Kraviz and her love for beautiful feet. Oh! And we can’t forget about the bouncer of Berghain refusing entry and shouting ‘nein‘ to anyone who wants to get into the mythic nightclub.

Mitch Davis, one of the admins of the group, became idolised by the group’s members. They claim that getting a post approved by him is harder than getting a record signed!

A shift in the future of TWTMEGP?

The reasons about TWTMEGP being temporarily archived remain unclear. We know moderators were considering selling it, as the group grew very quickly and it became too big to manage. With almost 150,000 members, some of the group’s posts have more engagement than official DJs Facebook pages or news outlets. With the right buyer, the group could potentially become a goldmine.

However, a non-official source has told us that TWTMEGP was only ‘paused’ to support George Floyd‘s cause and express its solidarity towards the protests against racism.

Whatever the reason is, we are glad to see that TWTMEGP is back! Check some TWTMEGP memes below and stay safe!