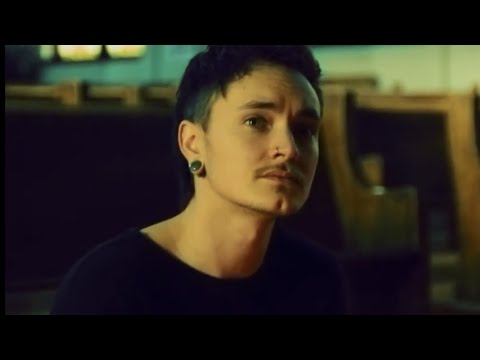 An important message told with powerful vocals and inspiring visuals.

Emmet Michael opens up to us with his track ‘God Shaped Hole’. The lyrics grab you right away and there’s so much emotion in Emmet’s voice. When you read his story, you’ll understand why.

The Edmonton-based trans singer/songwriter grew up in a devout Christian family where he realized at an early age he wasn’t necessarily like other kids. It wasn’t until he enrolled in public high school that a whole new world opened up before him.

“When I got to high school and saw these people that openly identified as members of the LGBTQ community, it was both incredibly daunting and such a relief,” Emmet begins. “Up until that point in my life, I truly thought I was crazy because I never had the words to be able to explain what I was feeling inside. I ended up immersing myself in faith, hoping God would be able to ‘cure’ me.”

Faced with such a life-changing revelation and the idea of being rejected, Emmet turned to drugs and alcohol, which eventually led to him being expelled from school and leaving home. His wake-up call and subsequent path to sobriety came at age 17 when he was charged with drug offenses. It was during his enrollment in a treatment facility that he realized his substance abuse stemmed from his falsely-guided belief that his faith and his lifestyle were too diametrically opposed to peacefully co-exist.

However, somewhat prophetically, it was while he was in rehabilitation that Emmet picked up the guitar and began chronicling his journey with song.

“I picked up the guitar for the first time in years while I was in treatment, and I quickly realized music was going to be one of my primary sources of solace,” he says. “I was there for three months and played guitar every day; it felt like freedom and ended up being an important form of self-expression. I had held so many things back for such a long time, having these experiences pour out of me was like lifting a weight off my shoulders. Songwriting opened a door for me to feel safe to discuss things I tried to push away for so much of my life. Through song, I wasn’t afraid to share anything.”

It was in the midst of these life-altering circumstances that ‘God Shaped Hole’ was written. The song chronicles Emmet’s journey of living his truth as a member of a faith and the disillusionment that can arise from the judgement of those so set in their ways that they refuse to believe anything other than what they’ve been told.

“Many people in the faith community – any faith community – have a hard time reconciling with the LGBT community. But their beliefs come from what they’ve been taught and what they’ve been told, and they somehow miss the fact that, at our core, we’re all looking for love and acceptance. We have more in common with one another and are bigger than what makes us different from each other.”

But as he continues writing and sharing his story, he reflects on just how far he’s come.

In addition to having transitioned a little more than five years ago, he has since reconnected with his mother, from whom he had lost touch in his addiction. Not only has she become one of his biggest supporters, but also provides backing vocals on several songs on Emmet’s forthcoming album “I Hope You’re Home”.

But as challenging as life has been so far for the songwriter, he believes it’s these experiences that shaped him into the person he is today.

“I would never want to change the fact my queer identity has made me what I am today. And being surrounded by people that love and support me is the biggest affirmation of all.”