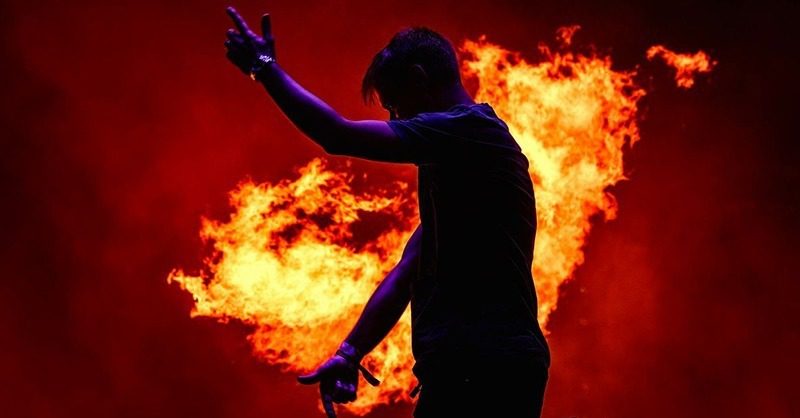 One of the most iconic festivals in the electronic music scene is without a doubt Ultra Music Festival. Every year Ultra brings the best djs in the world and one of them is always trance pioneer Armin van Buuren. Today, we wanted to do something special for you, so we collected each one of Armin’s Ultra sets from 2012 to 2020.

Since 2005, Armin van Buuren has participated in Ultra Music Festival, giving him a streak of 14 consecutive years. However, it wasn’t until 2012 that people around the world were able to see Ultra live broadcasts.

The year 2012 was one of the busiest for Armin when it came to touring but it certainly did not lack excitement not fun. At the time, he characterized his Ultra Miami Sets with a lot of trance (when many DJs were experimenting with other genres), most of them from his 2012 A State of Trance compilation.

As for his iconic ASOT 550 set, the highlights were MaRLo‘s ‘Megalodon‘ and his very own track, ‘Suddenly Summer’.

A State of Trance consequently becomes one of the most anticipated parties at the festival. Of course, it’s also a time where Armin can show his trancy side, pleasing his yesteryear fans.

It was in this year that Armin released his fifth studio album, Intense. Also, we begin to see Armin show a tendency to have two phases. One where he plays the most popular songs (typically the mainstage) in his repertoire and the other where he brings out his more trancy side (typically ASOT).

Armin starts this Ultra Miami set with what would later be one of his better-known songs, if not the best known to everybody. The Grammy nominee ‘This is it what it feels like’ with Trevor Guthrie was played for the first time here.

Other songs that made this Armin Ultra Miami set epic were ‘Forever Is Ours’ featuring Emma Hewitt and Armin van Buuren & Markus Schulz collaboration, ‘The Expedition’.

In this Ultra Miami set, Armin van Buuren also debuted several tracks off Intense. Although, some of them were remixes like Armin van Buuren feat. Fiora – ‘Waiting For The Night’ (Beat Service Remix).

Considered by many people as one of the best sets of Ultra Miami 2014, Armin brought the energy and heat for this mix. He joined in the Armin the trend of several Dutch DJs to wear Dutch soccer team jerseys. He also debuted new songs from himself and other artists.

When the line up for A state of Trance Miami 2014 was revealed, everyone got the bad news, or good news, that Armin was not going to play that year. In his place was a mysterious name that many placed as his alter ego in several of his songs: Gaia.

Many had seen this name with Armin in the past, playing under another style and indeed it happened. Gaia is a project executed by Armin van Buuren and Benno de Goeij and their magna carta presentation was at this edition of the ASOT Festival.

In this year Armin released his sixth studio album: Embrace. Although its official release wasn’t until October, indications of a new studio album were hinted during his sets in 2015.

Armin began his set with a collaboration with Mark Sixma. Sixma was considered as a rising star and for many others, a legendary producer. Here we first see Armin show hints of the new album with a song now well known, ‘Another you’ featuring Mr Probz.

This set has an epic start with the return of his pseudonym Rising star with Betsie Larkin on vocals. Another great moment was the debut Paul Oakenfold‘s remix of Armin van Buuren’s ‘Communication Part 3‘.

In 2016, Armin played many songs from his recent album Embrace with their soon-to-be remixes. An example is First State’s remix of Armin’s ‘Heading Up High’.

We continue with Armin’s 2016 ASOT set, as he continued to debut remixes from Embrace. During this set, he played Arty’s version of the title track of the album.

From the progressive trance collaboration with Rodg, ‘High on life’, to the most melodic uplifting trance in the genre, Armin lead us on a trip through the many styles and facets of trance that have embodied his love for the genre.

Armin van Buuren celebrates 20 years of his successful career at Ultra Miami. Opening his set with the hymn from ‘The Best of Armin Only Concept‘ ‘My Symphony’ sets the tone.ujy7kl

As always in the Ultra Miami Asot Stage, Armin offers the best in terms of trance and its subgenres. From progressive trance to psytrance.

This set was characterized by big tracks from ‘The Last Dancer’ with Shapov to his greatest hit of all time: ‘Blah Blah Blah’.

This ASOT set was a great one, including a debut from his pseudonym Rising Star with Fiora. This was also Armin’s final time performing at the Ultra megastructure, being shifted to the Live Stage for 2019.

For Ultra’s Virginia Key year, he revealed he remixed one of the greatest classics in music: Van Halen-‘Jump‘ and brought the legend out with him. Armin always chooses Ultra Music Festival Miami to release his next songs.

Eric Prydz was unable to appear at the ASOT festival due to a medical condition and there was no other DJ to cover that hour. Therefore, Armin played 3.5 hours. This epic set featured everything from signature tracks on the Prydz sets to the most aggressive tech-trance he could find.

The year COVID-19 sent us all to rest. Including the always unstoppable Armin van Buuren who always has a set in Ultra Miami or so it seemed until someone came up with a good idea.

Before all the big festivals dared to do virtual festivals, Ultra did it first. So Ultra Music Festival had its 2020 edition, although not in the way that we all would have wished.

But in the meantime, Armin does not lose the old habit of releasing his most recent singles in Ultra. This time a new track with Fatum and many more.

Armin van Buuren has shown in his Ultra Miami Sets from 2005 to 2020 (although we could all see him until 2012) why he is until today one of the most anticipated DJs at this party. From releasing a lot of new songs to inviting artists from distant countries, even making a concept with artists of his style and label.