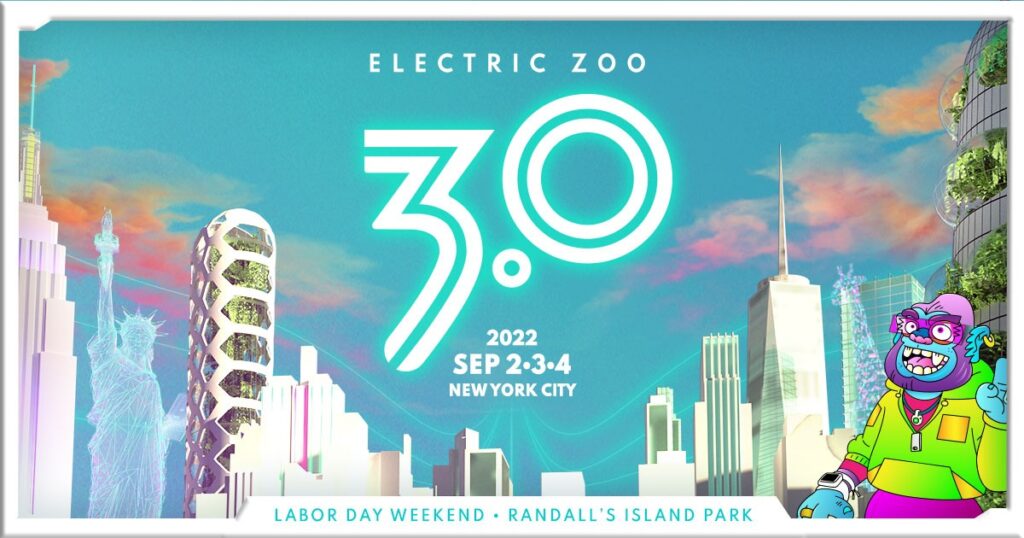 Electric Zoo 3.0 (EZoo) is transforming New York’s Randall’s Island Park this Labor Day Weekend into a tech driven, electronic dance music paradise this Labor Day weekend. Dubbed as the “last dance” of the summer, NYC’s premiere festival lineup is being curated with the help of fans and several artists are even curating their own stages to put together their perfect collection of performances. Big name artists like Carl Cox, Brownies & Lemonade, CloZee, and Tchami will all be curating their own EZoo stage takeovers, you can read about each one below.

Los Angeles’s Brownies & Lemonade has been one of the fastest rising party brands in the US. Notorious for bringing the craziest vibes and unearthing genre-bending dance music, they have become a staple brand associated with EZoo, who will once again be bringing a taste of the west coast to the east coast with their fourth appearance at Ezoo. Attendees can expect a wide variety of genres and cutting edge electronic music that represents the energy and vibe that Brownies & Lemonade curates in all of their shows, even the smallest most intimate ones. Brownies & Lemonade will showcase a powerhouse lineup that highlights many left of center electronic music artists that are pushing genre boundaries, taking over The Grove on Friday, September 2nd.

Fronted by d&b star Netsky, who’s accomplishments on the charts are just as impressive as his live shows, his set is a must for new and returning Ezoo fans. The dynamic & world influenced duo, Memba, will grace the stage, along with the cinematic sounds of Apashe. One of the scene’s most exciting up and coming artists is Rossy, already having a few B&L events under her belt, will be making her Ezoo debut. Her ability to blend trap, future bass, and classical components has resulted in an iconic sound that has earned her a seat at the scene’s biggest festivals. Of The Trees will also be playing Ezoo for the first time, showcasing their hypnotic and unique sounds while Deadcrow, known for his innovative approach to wave music, will infuse his set with electrifying grime, trap, and melodic sounds. It wouldn’t be a proper Brownies & Lemonade takeover without epic B2B’s. B&L are always championing marginalized artists in the bass community and Jon Casey and Capshun are two rising artists that “deserve more festival recognition”. Listening to each of their individual tracks, it’s easy to gather that this b2b is bound to be a set oozing with pure energy. G Jones and Eprom‘s B2B will put on display two immensely talented artists at the pinnacle of their craft with an audio visual experience like none other.

Carl Cox is making a triumphant comeback to the festival after 11 years. He’ll be performing a rare US festival set while also showcasing highly sought-after live acts at his Carl Cox Invites stage, taking over the Hilltop Arena on Sunday, September 4th.

It’s been over a decade since Carl has played EZoo and this year he’s treating dance music aficionados to a very special house and techno fueled lineup featuring Detroit’s DJ Holographic, known for delivering a mix of musical cuisine that combines House beats, passionate R&B, Hip Hop, unreserved Disco, true Detroit Techno, and Motown. Carl is also bringing back a close friend who he frequently shares the stage with, Loco Dice. It’s also been 11 years since Loco Dice has performed at Electric Zoo, making this reunion all the more special. Additionally, NYC’s tech house ambassador Charles Meyer has a natural aptitude for giving partygoers not just what they want, but also what they need, making him a perfect addition to the stage. Joining all the way from the shores of Ibiza is Chelina Manuhutu, a talented, strong and exotic feminine force and one of the most exciting artists in the underground music global scene. Carl will be showcasing new music off of his highly anticipated forthcoming album, ‘Electronic Generations‘, to the Ezoo crowd this year.

Topping off the Carl Cox Invites stage will be Andrea Oliva B2B Ilario Alicante. Andrea Oliva has earned himself a sterling reputation over his 25 year career. He continues to command the stage at Ushuaïa throughout the summer, headlining one of the island’s most popular parties. Ilario Alicante’s rise has been nothing short of meteoric, known for slinging sizzling house and techno sets across the biggest festival stages. Together, Andrea Oliva and Ilario Alicante are poised to deliver an unforgettable set for EZoo fans.

CloZee is not only making her debut at EZoo, but also is featuring some of the best bass-infused electronic acts at her Odyzey stage, taking over the Riverside stage on Sunday, September 4th. Hailed by Billboard for creating music that “hits your solar plexus with wavy wobbles”, CloZee has sent ripples throughout the electronic music industry over the last few years, cementing herself as a modern champion of genre-bending bass. Her sound is succinctly disciplined – rooted in classical guitar production and fused with a penchant for freeform melodies, praised by Forbes as creating her own “true CloZee style.”  Her imprint, Odyzey, has proven to be a home for some of the best bass-influenced music producers, with music that embodies her adventurous spirit, drawing inspiration from all around the world. On September 4th, EZoo attendees will get to witness the debut of the Odyzey stage, which is packed with immense talent.

Joining the lineup is one of the modern innovators and trailblazers in the freeform genre, Mersiv, whose music has a way of transmitting therapeutic and healing energy to listeners. Portland-based artist Redrum is known for curating bewitching music to help her listeners find their inner magic, and is a must-see set. INZO is an exciting addition, whose mission is to make something beautiful for others to listen to. He lives up to that mission through luminescent synth lines that flutter through his tracks like fireflies, chest-caving bass, and wistful, nostalgic vocal samples. Canvas consistently delivers music for your mind, body, and soul, something she considers #GutMusic. Tripp St. is another name synonymous with the Odyzey imprint, offering a unique integration of deep freeform bass and apparent boom-bap influences. Wreckno has helped carve a safe space for LGBTQ+ people in the Bass Music/EDM world and never fails to deliver electrifying performances. Rome In Silver has an uncanny knack for placing tactful melodies atop plenty of gusto on the low-end that never fails to leave crowds mesmerized during his shows. Sumthin Sumthin is beloved by both the underground and the mainstream, with an ability to bridge together lightness and darkness in a formidable way whether in the studio or on stage. Capping off the Odyzey lineup is NotLo, who continues to make an impact with her music along with her actions, using her platform to support and donate to a variety of organizations like The NAACP and RAINN.

Tchami, who will be making his return to Electric Zoo while also curating his very own stage in the name of his imprint, Confession.The Confession stage will feature some of house music’s most profound heavy hitters taking over the Hilltop Arena on Friday, September 2nd. Widely-known as the founding father of the Future/House genre, the Parisian producer and DJ has been an instrumental figure in pushing dance music forward. Aptly described by Variety as an artist that has “what it takes to make it rain,” Tchami continually finds innovative ways to add new sounds and textures while staying true to the core tenets of the house aesthetic, a mission that holds true for his label, Confession. Tchami’s Confession parties have a history of selling out The Brooklyn Mirage in the past, making it all the more special that they will make their mark on the Hilltop Arena this year.

One look at this stage’s lineup is enough to get any fan of dance music excited. Joining is Tchami’s french compadre, Malaa, the masked enigma who carries an unprecedented aura of mystique and hype around all that he does. Croatian raised producer Matroda will also be gracing the decks. Welcoming house music in his own unique way with his ‘matrodasound’ coined by his true fans, the studio and stage set no limits for all that this incredibly celebrated artist is capable of. Taiki Nulight has crafted a trademark style that is truly his own, seamlessly blending gritty night bass elements, with electrifying four on the floor grooves. You can never quite guess what he’s going to play next in his sets, which is part of what makes his performances so special. Capozzi is new to the scene but no stranger to rhythm, debuting her first record on Confession in 2019 and since has continued to release bass rattling records that have rocked festivals and clubs around the world. BIJOU is a distinguished leader in the G-house movement who has gained all the necessary street cred and then some, sure to deliver a performance of epic proportions. Also regarded as a major orchestrator in the G-House sound, Wax Motif has paved his own way, infusing R&B, disco and UK bass influences into what is a thrilling sound.