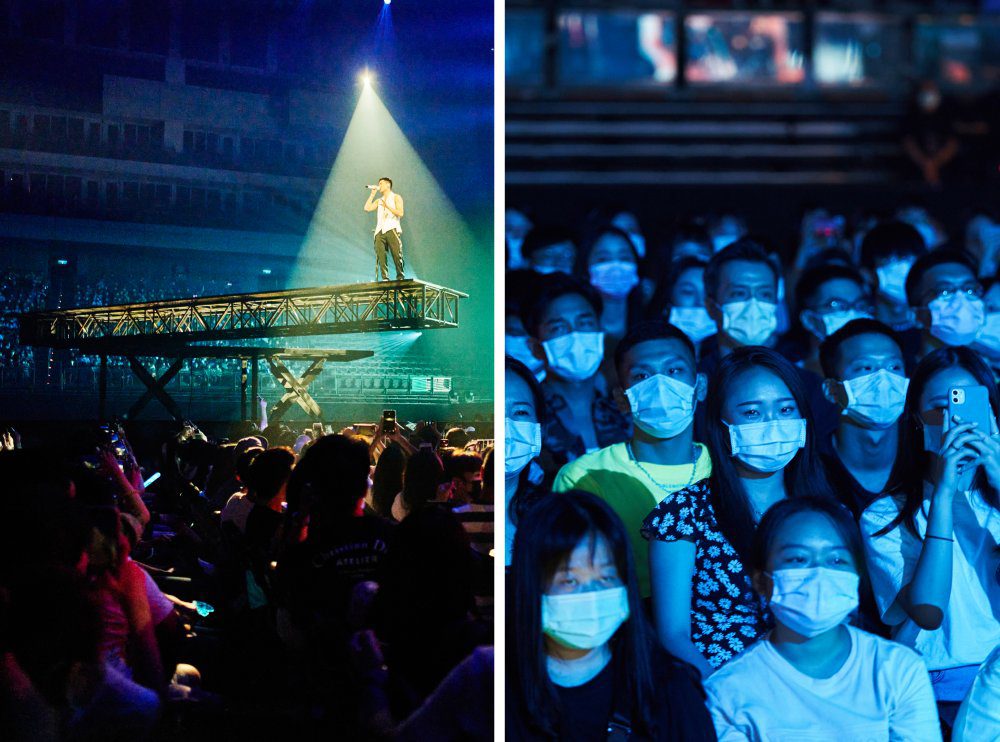 The Republic of China starts moving towards a new stage as COVID keeps losing its strength. After a tough battle with the virus and the implementation of strict social measures, Taiwan held a large concert. It was indeed its first 10,000-person Arena Concert since the pandemic began.

The night of August 8 was very special for the people of Taiwan. That night, over 10,000 concertgoers at the Taipei Arena experienced the energy of a packed house singing along with a beloved artist’s songs. It was the first big concert since social distancing measures began. The event could take place thanks to the management of the self-governing island and its strong response to the coronavirus.

Putting things into context, Taiwan has a population of more than 23 million. Although the country has a large population, they only recorded 479 cases of COVID-19 and seven deaths. Amongst the prevention measures, you can find border control or mandatory 14-day home quarantine for travelers. In early June, there were no new locally transmitted cases for eight weeks. consequently, the government lifted some restrictions on audience numbers for large gatherings.

The main act of the night was Chou’s concert. As everyone in the country would expect, the artist managed a sold out in the indoor space. Apparently, Taiwan is getting close to going back to normal, at least regarding live music. In fact, the Taipei Arena’s fall lineup includes several more concerts scheduled for the coming weeks. Frances Lo, CEO of M.Star Entertainment, which manages Chou, said the Taipei City Government had announced available dates for the reopened Taipei Arena after gathering size restrictions were eased.

Chou had the honor to be the first to offer a concert to the population after the difficult times. During his performance, the artists took a moment to make an appeal that fans keep their masks on throughout the show. “If you want to sing, you can still sing! Don’t let the masks stop you.”

The hype regarding the performance was huge. Proof of the enormous desire of the fans to enjoy the concert was the number of tickets sold. The 25-year-old artist had sold out 42,000 tickets across four shows in 15 minutes, a high-pressure situation. For this unusual situation in the last months, safety protocols were key to the success of the event.

As it was not enough with the massive crowd in the venue, many fans gathered outside before the concert. They were wearing portable fans, parasols, and masks in the humid, sunny afternoon. Definitely, the safety measures were on point providing a safe environment during the whole show. The obligation of wearing masks, temperature checks upon entry, and the need to provide a physical ID card or enter their names and phone numbers into a government website made the event smooth and safe. After checking in, attendees received a QR code that would facilitate contact tracing if needed. Although following such a long process in order to access the venue, fans behaved properly and followed the public health measures.

I think they’re necessary. We’re already thrilled that we can go to a concert. To be able to still attend a concert during the coronavirus period, even if we need to wear masks and get our temperatures taken, that is OK

Some attendees about the rules of the concert

The crowd set an example of good behavior at the Taipei Arena, where a quick glance across the crowd of thousands at any moment showed how the fans followed the rules. Although there were a few masks tucked beneath a chin and the occasional nose exposed for deeper breaths, the event was well planned. Such a high level of compliance meant that Chou could make the most of his proximity to adoring fans. The artist even took selfies with some fans. Chou also gave high-fives as he jogged along the stage, a move that intensified screams throughout the arena.

Luckily, live music is slowly coming back to normal. Shows like this concert in Taiwan prove that if you follow safety measures properly, the show must go on.