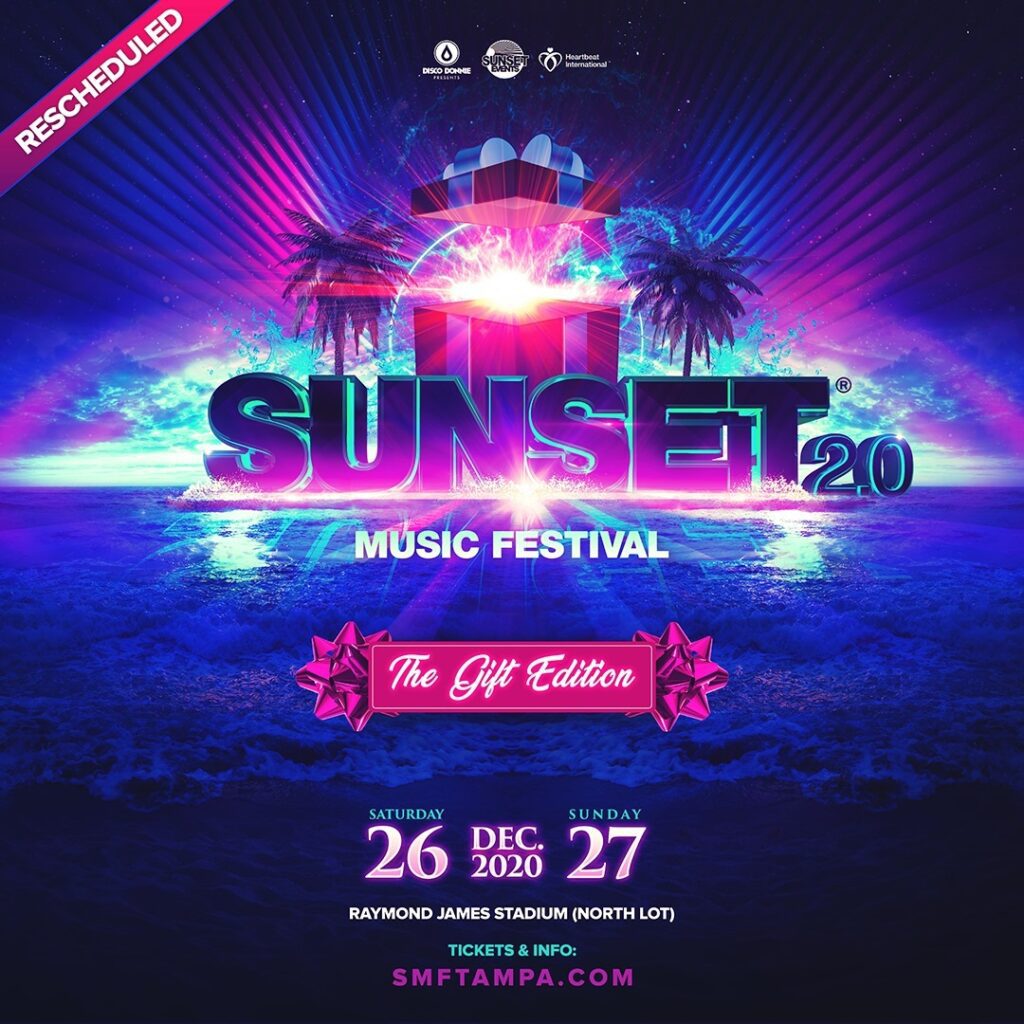 Sunset Music Festival, initially postponed from Memorial Day weekend to July 4 weekend due to COVID-19, has been rescheduled yet again – to another holiday weekend. The dance music festival in Tampa, Florida, is now slated for right after Christmas. Save the date for December 26 and 27.

Organizers announced the change on Friday along with the festival’s new name, Sunset 2.0: The Gift Edition.

“We knew it was a longshot AND we really wanted us all to be together—but the window has closed on the ability to put on a safe festival on the Fourth of July weekend,” the Sunset organizers said in a statement. The organizers, which include Disco Donnie and Sunset Events, stated they “looked at all options” before offering fans “a special edition of Sunset during the holidays.”

“We acknowledge this is not what any of us wants to hear, but we need to take all necessary precautions under these unprecedented times,” the Sunset team stated. “We love you and we cannot wait to get back to the party, in a safe environment along with the quality of operations and production that you come to expect from us.”

With so many spring and summer music festivals canceling their 2020 editions and punting to 2021, the Sunset team’s efforts for December are appreciated by dance music fans. However, December isn’t guaranteed safe ground. Some public health experts are bracing for a possible second coronavirus wave in the fall. But if December pans out for Sunset, attendees may enjoy temperatures of around 75 degrees, versus 90 degrees in July.

DJs originally booked for Sunset 2.0 included Alison Wonderland, Chris Lake, Dog Blood (Skrillex and Boys Noize), Kaskade, Illenium, Fisher, Zedd, and Zeds Dead. Regarding whether the artists will remain the same, the festival’s frequently asked questions section states they are “working to develop the lineup, which will be announced when the global situation becomes more stable.”

Already purchased tickets will be automatically transferred to the December event. They’ll also include a $25 food and beverage credit, $25 merchandise credit, and first dibs at 2021 tickets at the lowest price. Ticket buyers who desire refunds can fill out a request form by November 22. Organizers say the lineup will be released before the final day for refunds. Disco Donnie tweeted that refunds will be available “until the day the wristbands ship for the new date.”

Single-day tickets are expected to go on sale when the artists schedule by day and set times are released.

In years past, the two-day festival has drawn more than 50,000 people to Raymond James Stadium. The festival features a sunset-shaped main stage. In 2018, the festival expanded from three to five stages.

Some restaurants, stores, and beaches in Tampa Bay began reopening in early May. Central Florida’s first rave since the lockdown, Carnage’s ROAD RAVE drive-in concert, is scheduled for June 6 in Orlando.