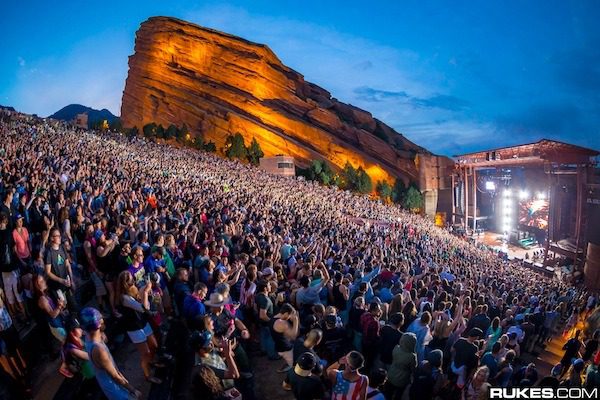 Surprisingly, there is a hidden tunnel under the famous music venue that leads to an underground backstage area. Out of sight from concertgoers, it also has a special staircase tunnel where artists and bands have written their names or left messages on the floor and walls; some of these artists include Gorillaz, Mac Miller, and Pretty Lights.

According to Boster, venue construction plans from 1959 mentioned a tunnel, so it may have been created sometime around then. However, the initial start of the tradition of signatures and messages is entirely unknown. The oldest date that was spotted by Boster was a reference to 7/6/88. Unfortunately, it is believed that many of the signatures or messages older than that – back in the 60s or 70s – may have faded away.

According to Tad Bowman, the venue director, “that tunnel has come to represent this special uniqueness of what Red Rocks is. People go through there, in a literal sense leaving their mark, adding to this sort of mystique. … The tunnel comes to kind of represent that whole Red Rocks mystique.”

Bowman usually walks the tunnel endlessly during the summer season. Many of the artists and performers he has seen have been opening acts or new talents who consider the Red Rocks Amphitheatre to be a milestone.

Certainly, it would be interesting to see what kinds of signatures and messages are down below in the Red Rocks hidden tunnel. Unfortunately, only so many people are able to physically view or take part in this tradition at least once in their life. Nevertheless, you can still take a look at the tunnel online. To view photos and find more information on the tunnel, make sure to check out the story there.