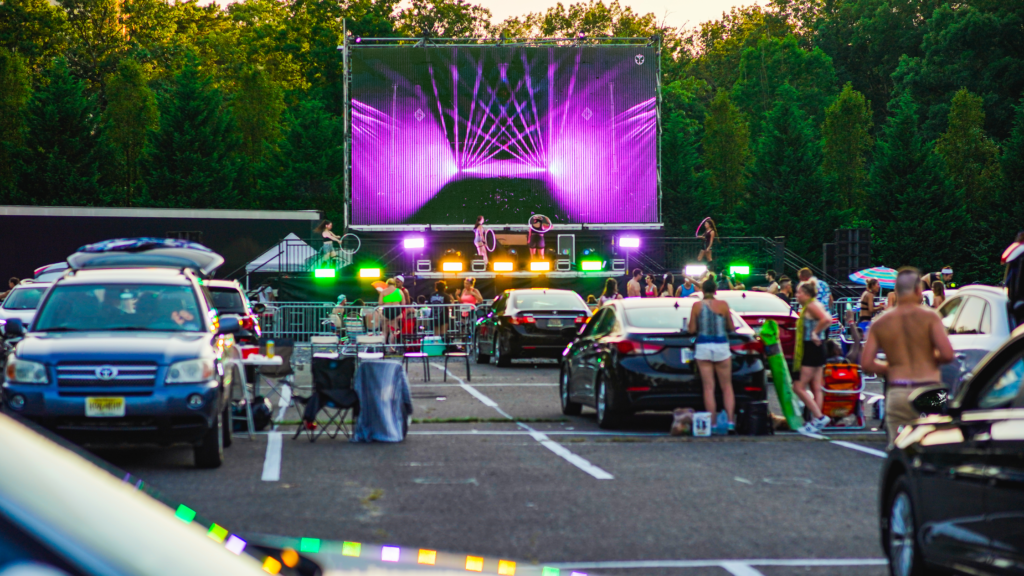 Over the course of the coronavirus quarantine, I went from dying to go to a drive-in concert when they first emerged, to doubting they could replicate the feeling of being at a rave and thinking they might not be worth it. On Friday, the day before the Tomorrowland Around The World digital festival, my opinions took another turn in the rollercoaster of emotions of these strange times.

An ad popped up on my social media feed for a drive-in experience broadcasting Tomorrowland. It made me reminisce about the first time I attended the festival in Belgium in 2015—how magical it was, how much I missed the excitement of simply going to an event. And it reminded me, sadly, of how unexcited I was to watch Tomorrowland 2020 from home after months of livestreams that don’t come close to the real thing.

Suddenly, I had a huge urge to go to this drive-in organized by Our People Entertainment, a promoter I had never heard of. It was something different, seemed better than streaming from home … and I guess I really wanted to see if that feeling was still there.

So early on Saturday, I got in a car and on my way to my first drive-in show.

The official Tomorrowland livestream partner held the event at the Rhythm & Reels outdoor drive-in movie and event venue in Williamstown, New Jersey, less than two hours driving from New York City and just 20 miles from Philadelphia. As soon as my friend and I pulled into the driveway, event staff checked us in through our car window and momentarily directed us to our designated parking spot. The 21-and-over event was conveniently BYOB, with non-alcoholic beverages and food available for remote ordering. Patrons were not temperature scanned, but staff were. Driving in was much breezier than waiting in line to get into a traditional festival.

As we drove in, the 36-foot LED screen came into view right away. Parking spots were assigned on a first come, first served basis and each had its own paint-drawn dance area six feet apart from the next closest ticket holder. We were asked to stay in our socially distanced spaces but could wander off with masks to use the porta potties that yes, felt like a festival.

Set times for the broadcast were obviously on my mind and the organizers revealed them only upon arrival on the LED screen between artists. This encouraged us to arrive as close to the 2 p.m. start time as possible, which wasn’t my habit as a veteran festival goer. I wound up appreciating the early arrival incentive because I was ready to spend as much time as possible on festival grounds after not being at one for half a year due to Covid-19.

We got there in time for the live broadcast of Eric Prydz debuting his [CELL.] show. The way the LED screen was set up, no vehicles or people blocked the view. Prydz’s new visual corridor with lights and lasers on all four sides looked neat on the screen, especially from the VIP area in front of the stage where groups could get away from their cars and onto a dance floor sectioned off by steel barricades.

With the different time zone, multiple stages and the viewing party ending at 10 p.m., Our People Entertainment had to pick which sets to broadcast. They selected live streams of Nervo, Claptone, Tiësto debuting his melodic house music alias VER:WEST, Carnage and Tomorrowland mainstays Dimitri Vegas & Like Mike.

Unlike some drive-in concerts early on that arranged audio through attendees’ personal vehicle radios, the sound system at this drive-in was good. So good that I actually put my earplugs to use.

The organizers made the wise choice to schedule Armin van Buuren’s digital main stage set as the closer. Due to some minor technical difficulties, they moved it to sunset which worked out perfectly. As dusk fell, the stage lit up. Drive-in ravers fell into a state of trance, threw their hands up in the air and waved complimentary glow sticks. Excitement washed over when Armin dropped an ID, and it felt almost like experiencing it somewhere live.

“We were trying to just take it up a notch from the dull streaming world that we’ve been in,” Our People Entertainment co-founder Will Horrocks told EDMTunes.

“At least it was a taste of that [festival] atmosphere.”

Like many of the drive-in attendees, Horrocks was an EDM lover and festival goer. The summer after he graduated college in 2013, he left Philadelphia and went backpacking in Europe for 3 1/2 months and covered dance music festivals for a blog. On the Friday morning before opening the Tomorrowland gates, organizers gave media members including Horrocks a tour of the festival grounds. He found it to be “quite a magical place, you feel it there.”

“The grass was all pristine and they walked us through each stage and the meaning behind it, why this was here, and I just remember looking at these guys and thinking they were the coolest dudes I had ever met,” Horrocks said.

“That’s kind of what changed my life. I came back and that’s what I wanted to do.”

A few years later, Horrocks and a partner founded Our People Entertainment. The company specializes in building out operations for clients’ events and experimental marketing campaigns, not promoting and controlling an event from top to bottom. But when coronavirus wiped out live events as the industry knew them, Horrocks saw an opportunity in doing a drive-in event. Unlike drive-in concerts past, his idea was not a live show, but rather live streaming on a big screen.

“I think it was the first time, and the only time that something like this has ever happened,” Horrocks said.

Our People Entertainment reached out to Tomorrowland and secured official broadcasting rights to stream the festival. Due to the time difference, Horrocks and his team were often up until 3 a.m. communicating halfway across the world to get their promotional material approved, while Tomorrowland organizers were busy trying to create a groundbreaking digital festival.

Then there were the actual broadcasting logistics. Tomorrowland provided some options for sets to play and was very particular that they couldn’t be shown ahead of the live broadcast schedule. Our People Entertainment also listened to feedback from fans on which sets they wanted to watch.

“We did the best that we could with what was available due to timing,” Horrocks said.

Our People Entertainment didn’t get access to the content until the morning of, each day. The technical difficulties on Saturday of only being able to stream audio for Fedde Le Grand, Afrojack and Steve Aoki, were all resolved for Sunday.

“There’s a huge number of people who live for festivals in the summer and that being taken away has been hard,” he said.

“I think we brought some individuals an experience that at least felt something like what they’ve been missing.”

Pulling off the production is one thing. Finances are another. Rhythm & Reels has about 140 parking spaces and only half capacity is allowed during the pandemic. About 30 cars attended each day, meaning only about half the tickets were sold. Horrocks said he had a short turnaround time to promote the event, but acknowledged that recouping costs is a major roadblock for the live events industry.

“This was a labor of love,” he said, “And we want to be more profitable moving forward.”

But Horrocks is investing in the model. He has a video team working on an after movie, just like regular festivals, and plans to bring live DJs for drive-in concerts in the near future.

“I see it as nothing but positive,” he said.

“It showed our operation does work—we can do it safely and also allow people to have a good time.”

On the drive out, I felt as if I was leaving an actual dance music event, just one that was more intimate. Having a socially distanced drive-in spot is like having your own table or VIP section. Some drive-in concert prices have been steep, including a charity event The Chainsmokers held in the Hamptons on the same day. Granted it wasn’t a live performance, but the Tomorrowland festival drive-in experience was reasonably priced starting at $175 per vehicle of up to five people, which breaks down to $35 per person. That was a good value given Tomorrowland single-day passes were €12.50.

Most importantly, I went to chase that feeling. No Kandi was exchanged with strangers, but some elbow bumps were. Everyone dressed the part and raged in unison at the drops. And when Armin played one of his classic tracks, I was so thankful for the drive-in experience … relieved that ‘This Is What It Feels Like.’