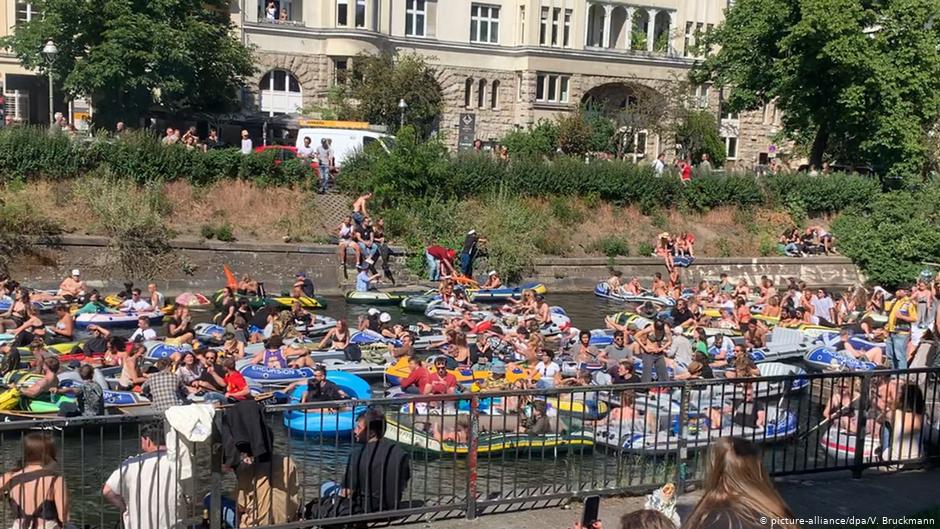 It began as a plan for 100 people to hold a floating party protest on Berlin’s Spree River in support of shuttered clubs in the city. Soon after the first boats embarked, though, many others including rubber boats and kayaks joined the demonstration. Pedestrians along the canal partook as well, and it swelled into a full-blown techno party.

Participants danced on a float and onlookers cheered and whistled as 300 to 400 boats floated toward the Kreuzberg neighborhood.

When the non-socially distanced protest on Sunday got up to about 1,500 people, more than 100 Berlin police officers stepped in and broke it up, according to the German media outlet Deutsche Welle. The protest organizers reportedly asked participants to socially distance. But they halted the protest after speaking to police “due to distances not being maintained and due to complaints over loud music.”

As many as 3,000 people jumped in on the action, according to the local broadcaster rbb.

In a statement, the Berlin Club Commission said they were not responsible for the protest. Rather, it was led by a few good-intentioned people in the club scene. And they were apparently caught off guard by the high number of participants.

“In order to reduce the possible spread of infection, we ask that all demonstration participants limit their social contacts over the next 14 days—particularly those with contact to older or sick people,” the club commission stated.

The floating protest drew criticism on social media for unfolding as the Covid-19 pandemic continues. Some Twitter users said that it ended near a hospital. The techno party occurred as other activists in Germany’s capital protested the death of George Floyd after a white cop in Minneapolis knelt on his neck. A few hundred demonstrators with “Justice for George Floyd” signs rallied outside the U.S. Embassy in solidarity with the Black Lives Matter movement in the United States. Artists painted images in honor of Floyd on parts of the old Berlin Wall in Mauerpark.

Berlin has one of the most renowned club and rave scenes in the world. The clubs have not reopened since coronavirus spread rapidly worldwide in March. In late April, Berlin’s local government offered €30 million in grants to private institutions including clubs. Still, many club owners are concerned that they will not be able to recoup their financial losses. Meanwhile, others are trying to adapt to the unprecedented times. In mid-May, Berlin’s famous techno spot Sisyphos and the outdoor club Birgit & Bier reopened as beer gardens with no dancing allowed.

Germany has already lifted restrictions on the number of people who can gather for protests. However, social distancing rules have stayed in effect. No matter the cause, protests that are not socially distanced put cities in danger of new coronavirus outbreaks while a vaccine has yet to be developed. That could prolong plans to reopen economies and push the return of concerts and festivals back even further.