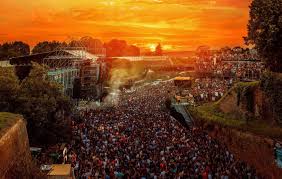 Some good news for the music industry! EXIT festival, the wildly popular Serbian music festival will now be taking place August 13 to 16 2020. EXIT Festival will celebrate it’s 20th birthday, a few months later than planned. The decision to move forward with the festival is based on the COVID-19 epidemic ending in most of the countries in the Balkans.

Luckily, people from all around Europe will be able to go to this festival, since Serbian boarders will be open. However, If there is another outbreak, testing may be required to enter. With that said, the Serbian Prime Minister is confident that the virus will be under control by August, and no additional steps will be needed.

However, due to COVID-19 there will be some additional measures in place to ensure the safety of all guests. Festival capacity will be reduced and some of the moats and trenches around the 40 stages will remain closed. Even with these changes, EXIT festival will NOT lose it’s shine. It’s most famous and beautiful areas, such as the 18th century Petrovaradin Fortress, will remain open.

Ticket sales will resume on June 1 – with some big names on the line up. These names include Black Coffee, Meduza, and Tale of Us. Per the festival team, many of the artists they are in contact with are extremely excited to debut back at this large festival, after months of live streams and isolation.

This of course, its excellent news for the music industry and the first glimmer of hope that normalcy will return soon. EXIT festival has received a lot of positive feedback from other festival promoters and agents. EXIT’s founder Dusan Kovacevic made a very powerful statement regarding the history of the festival. “Exactly 20 years ago, after a decade of isolation and civil wars in ’90s, we found an exit and embraced it as our name. Now, it’s time to globally exit from this pandemic.”

EXIT stems from the youth movement for peace and freedom in Serbia and Balkans. Aside from the musical factor, the festival works with thousands of humanitarian and social projects. EXIT plans to launch it’s biggest environmental project this year, called LIFE STREAM. This will steam shows from the festival and incorporate additional footage with quotes and information regarding the unprecedented environmental crisis amongst other social issues post COVID-19.

Take a look at the trailer below. Would you be willing to go back to a festival so soon?