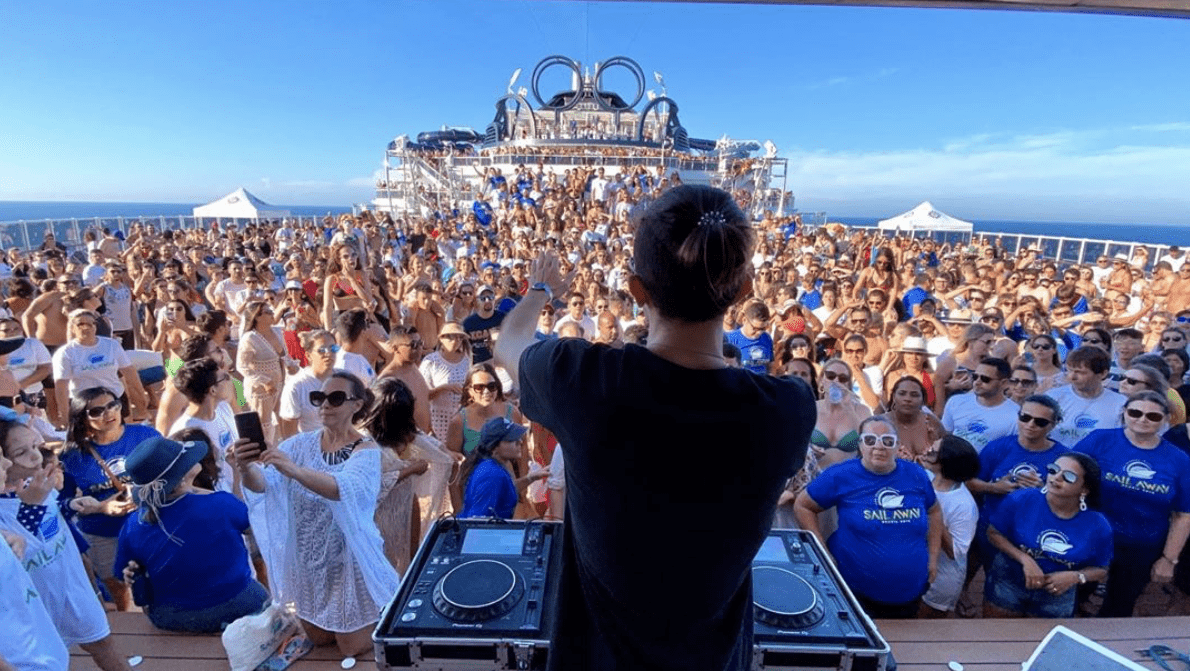 The horror stories of passengers stuck on cruise ships may have subsided in the earlier weeks of the coronavirus pandemic, but that nightmare situation lingered for the crew including—the DJ.

Until just this week, Brazilian DJ Caio Saldanha was lodged on a Celebrity Cruise ship, waiting alongside a multitude of crew members to be repatriated to their motherlands. Saldanha boarded the Celebrity Infinity for a 24-week work trip on March 14, according to Vox, a day after the Trump administration issued a mandate banning boats from sailing.

It was the same cruise ship that Groove Cruise Miami 2020 embarked on just a couple of months prior. As Saldanha’s Instagram posts from December show, dance music charter cruises like Groove Cruise and Holy Ship! aren’t the only ones with parties popping off on the decks. But since the Covid-19 outbreak, Saldanha stopped posting videos and pictures of him spinning. Instead, he chronicled the two months he was trapped on the ship on his Instagram story. “I want to be a source in the middle of this,” he said.

“Yeah, I stopped posting photos on Instagram about my job. I’m just giving information to people who follow me to try to expose what’s going on. I’ve stopped every bit of social media as a DJ—the stuff we do to get an audience, or work when we’re on land,” Saldanha told Vox in a report published Thursday. “I’m exposing my situation. I’m trying to help. A lot of people are in silence right now.”

Cruise ships disembarked most passengers by early April, but more than 100,000 crew members stayed on board, the Miami Herald reported last month. Part of that was because cruise companies anticipated the no-sail order to last only 30 days. However, in early April, the U.S. Centers for Disease Control and Prevention (CDC) prohibited cruising in American seas through late July, due to coronavirus infections among workers on ships.

“They disembarked all the passengers, and they kept all the crew members on the ship until further notice,” Saldanha told Vox. “It was hard to understand the situation.”

Crew members “didn’t have any kind of measure to avoid Covid-19 on the ship,” the DJ said. He added he was not aware of any cases on the Celebrity Infinity, but that crew members could possibly have been exposed.

While drifting in limbo outside of Tampa Bay, Saldanha said he and his fiancé passed the time by watching movies on YouTube and playing games. They also read up on financing for career shifts.

“We will need to be prepared, back on land, to face a new reality as far as work goes,” Saldanha said. “We’re going to need to change our jobs. We can’t work here anymore.”

Like the cruise industry, the music industry that has been devastated by the global pandemic. Mass gatherings including concerts and festivals are largely forbidden or have social distancing rules greatly restricting capacity. And the standstill in live events has halted gigs for all DJs, from the world’s most famous to Saldanha.

Life on cruise ship quarantine wasn’t pure torture. Saldanha said he and his fiancé had “good treatment.” That included a balcony guest cabin and being free to wander around the ship until midnight. Others weren’t so lucky. Saldanha said a music director and his girlfriend told him they spent five days in a windowless crew cabin.

“We’re sharing everything. People on other ships are reaching [out to] me,” Saldanha said. “We’re developing a network of people who are thinking the same way.”

Eventually, quarantine with a view grew ugly. Saldanha said he became “desensitized” to the sea’s beauty and viewed it as “oppressive” and “a jail.”

Saldanha heard that the ship would go to Barbados in late May and he could fly to Brazil from there. The couple made it home on Wednesday. They reunited with their dog and plan to get married. On his Instagram story on Thursday, Saldanha said in Portuguese that they are doing well and appreciate everyone who helped and supported them.

His takeaway message wasn’t one about music. Rather, it was about feeling forgotten on the cruise.