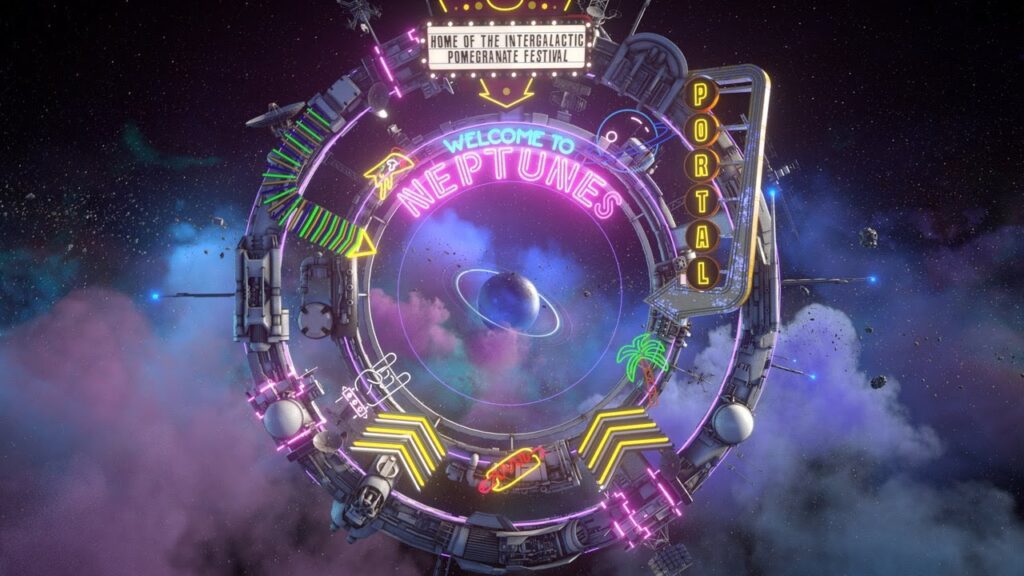 Deadmau5 and The Neptunes give their collaborative track ‘Pomegranate‘ a music video makeover with some trippy animated visuals. Take a ride with some crazy 3D rendered animals riding through a digital candy-colored universe. The Neptunes collaborated alongside Joel for a most excellent adventure.

Firstly, it opens up with the mau5 pulling up in a car, you get a rabbit, duck, and pig ready for a street race. Secondly, it is filled with the most colorful, neon colors, which is a sight to behold. Thirdly, you’re taken to the sky and grooving to the beat. You see dolphins riding dolphins and rainbows hanging out. Soon, you approach a portal to the Intergalactic Pomegranate Festival. Your guess is as good as ours. Though one thing we can, this is just an explosion of psychedelic madness.

With Pharrell’s vocals backed by a mid-tempo electronic pop groove, the song gives off a retro feel. Some elements of funk and disco diffuse through, which is characteristic of The Neptune’s production style.

We know that this is a far 180 from his usual musical productions. And this track seems to gear itself for summer play over the radio. Perhaps Joel is just trying out different audiences this year. Nevertheless, both artists’ production values stand their ground. Its release on Mau5trap adds one more track to the lineup. At least we can appreciate the diversity Joel is trying to bring. With quarantine still going on, now is the time to experiment.

Do what you will with this video, but it is an interesting one to watch. The Neptunes and Joel bring all the animations to this one. Is there anything you can’t unsee? Flying vehicles and big round helmets of different variety–anything else you need?

Don’t be shy, check it out below!