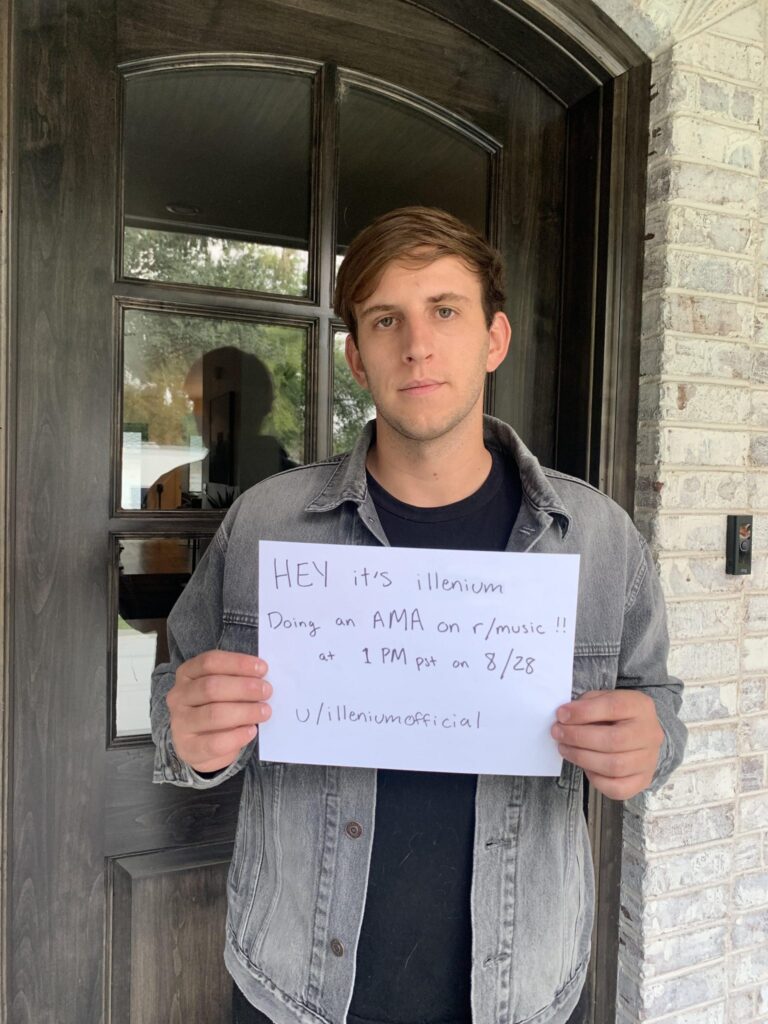 In light of his new single ‘Nightlight’ released on Friday, ILLENIUM did a Reddit AMA on r/Music earlier in the day. The melodic bass DJ-producer offered some context on his first single of 2020, which is his first song with independent label 12Tone Music. He also touched on a range of topics from new music to shows to defining his sound.

Here are 10 takeaways from the AMA with Nick Miller, known on stage as ILLENIUM:

1. ‘Nightlight’ is meant to lift us through these times

When a fan asked ILLENIUM what the inspiration was for ‘Nightlight,’ which he wrote with vocalist Annika Wells, and the meaning was behind the words, he replied, “I think lyrically it’s perfect for the climate right now.”

The global coronavirus pandemic is certainly unprecedented in recent history. Miller wrote that the moment he heard Wells’ demo, “it let me escape immediately.”

“It feels super angelic and the lyrics definitely give hope/light at the end of the tunnel,” he said.

Indeed, that is what ‘Nightlight’ does.

2. No timeline on a new album

A new single of course begs the question of when a new album is coming. When asked when fans can expect his fourth studio album, Miller said, “Not sure yet!”

He added: “Working hard on new music though!”

3. He’s still not planning on doing a virtual set

Many have noticed that ILLENIUM is one of the few big-name DJs who has not done a livestream set during quarantine. That is ironic, as a fan pointed out, because Miller was one of the only DJs who was set up pre-Covid-19 for streaming, including his gaming sessions. Miller responded as he did recently—his stance on the matter hasn’t changed.

“I’ve been streaming production streams and gaming pretty frequently, but coming from the Ascend Tour and the amazing success/mindblowingness of that show, it just doesn’t feel right for me to stand in front of a camera and DJ,” he said.

“I get most of my energy from you guys when playing a set and my music I think is better heard in an ascend show type atmosphere.”

With the above in mind, Miller added, “I chose to take a little breather cuz i was exhausted from touring.”

“Im spending most of my time making new music now,” he said with a smiley face.

Miller conveyed more than once that new music is where his mind is at.

Asked whether he planned to do a Twitch stream like the one he did breaking down ‘Lonely,’ Miller said he would try but, “Its tough cuz those take a bunch of time and ive been trying to crank on new music atm,” ending with another smiley face.

5. No shows scheduled yet

A question on many Illenials’ minds is what events Miller might play next year when things hopefully begin to get back to normal. Unfortunately, the future remains too uncertain for ILLENIUM to promise any shows.

“Its too hard to tell atm,” he said. “Just crossing my fingers that stuff starts coming back.”

Previously, ILLENIUM expressed a desire to do a three-day throwback event, with a night dedicated to each of his three studio albums, Ashes, Awake, and Ascend. A couple fans asked about the prospects of that happening in 2021. Miller told fans that he is “not sure” if that will materialize because a year of touring was lost to Covid-19. And he brought up new music, again.

“If we get shows next year i want to play new music, which f***s the trilogy idea up,” Miller explained.

Illenials of course asked Miller about a bunch of collaborations they hope or envision him doing.

Porter Robinson? Odesza? “Negative. Not in the works!” ILLENIUM said.

Another fan asked about Porter. “I love Porter! no collabs in the works tho!” Miller said.

Bastille? “Loveeeeeee bastille but not sure about that one,” he replied.

Asked straight up who he was likely to team up with in the future, he said, “Im working on some really fun ones at the moment but not ready to share yet!”

We’ll just have to wait and see.

8. He’s ‘mixing it up’ but sticking to his sound

‘Nightlight’ undoubtedly has the signature ILLENIUM sound, but given the AMA was done hours before the track dropped, fans unsurprisingly asked about the direction Miller is going in musically. Asked if producing dubstep or future bass is more satisfying, Miller said he really needs both, and that making one thing nonstop “would be boring and draining af.”

“I like mixing it up and keeping u guys on ur toessss,” he said.

Regarding whether he is going to put out more melodic dubstep songs, Miller said, “honestly dont even know what genre im making anymore but i feel like its kind of melodic dubstep ish.”

Miller said he likes to dabble in various genres at the same time and loves seeing all the forms a song can take. But Illenials need not worry—he said, “Ill always make moving, emotional music.”

9. Vinyl represses are not possible

Diehard ILLENIUM fans asked what the chances are of getting his first three studio albums repressed in vinyl, noting the high prices the originals are going for. Miller said he tried to do a vinyl of the trilogy, but was unable to because they were on different labels. Punctuated with a sad face.

The symbolism of the trilogy is no secret—all three albums start with an “A” and have two syllables. Asked to explain, Miller said, “it just felt right,” and likened it to the “first life cycle of the phoenix so it worked to mesh it together like that.”

But the time has come for a regeneration.

“The ‘A’ thing ended with ascend tho,” ILLENIUM said. “On to the next.”