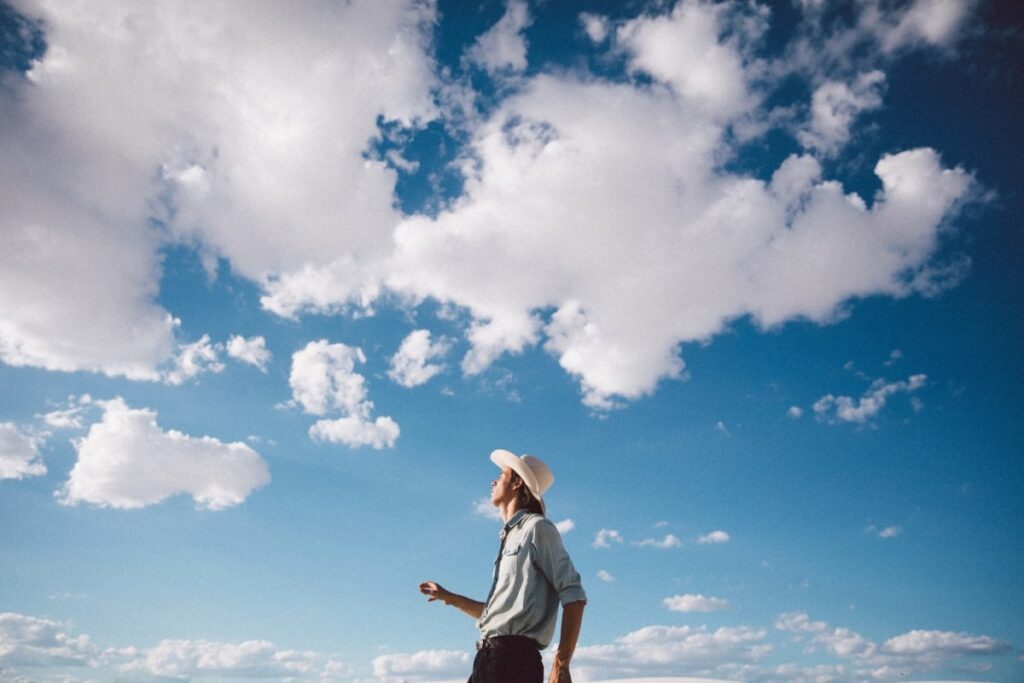 With a background in classical music theory and film scoring and a love of orchestral work, Tone Ranger is as influenced by an expansive global music history (from Aaron Copland, Charles Ives, and Ennio Morricone to Ali Farka Touré) as he is by immersing himself in landscapes, local traditions, and dance floors across the US. Using field recordings to construct beats and build complex, interweaving soundscapes, he developed the practice during a research trip to the Amazon jungle, where he abandoned his camera and sought to map out the topographies of the jungle basin through sound. Listening through the recorder to the amplified jungle and its symphonic cacophony of organized chaos, he sought to make music that channelled the sound design he heard in nature. His Amazon recordings feature on recent releases like "Flow," which samples crickets.

California born, Tone Ranger's obsession with the American Southwest stemmed from childhood trips to New Mexico and mystical portrayals in old movies. Returning from the Amazon, he left California to immerse himself in lands sacred to indigenous North American communities, which were also known for UFO sightings and supernatural encounters in addition to nuclear testing, weapon development, and for luring artists like Georgia O’Keeffe. Acutely aware of the sensitivity around the land and wanting to pay respect to its elders, he first lived in the Navajo Nation and worked on a family farm, learning about indigenous history and contemporary Native life.

In 2016, Tone Ranger joined the Standing Rock protests to halt the construction of the Dakota Access Pipeline, living in the camps for months—including time spent in jail—and working with the media team as a sound engineer. He quickly saw the necessity for sharing his skills and equipment, and with collaborator Alex Piechowski-Begay, started a programme for Indigenous Nations called "Sovereign Sounds," teaching how to engineer and produce, and providing equipment in order to facilitate the recording of stories and music. Tone Ranger regularly features Native artists in his music, including violinist Sage Cornelius and flautist Shelley Morningsong, referencing a range of traditions. Above anything, he seeks to have a direct conversation with the land, looking for the essence of the "American Soundscape."

After a year of living amongst communities, Tone Ranger began an intense journey of isolated immersion into the epic landscapes of the Four Corners region, traveling between Monument Valley, Moab, Durango, and Mojave Desert. He compiled a vast archive of field recordings, from minute insects scurrying over rocks to wild storms. In a field of Saguaro cacti in Tohono O’odham, he recorded a rattlesnake that became the beat for his single "Saguaro," which also features a recording of the Gila River that is used as white noise throughout the track. A horse called Mágico, who he met during an artist residency on a farm in Northern New Mexico, also features on multiple tracks.

Using Santa Fe as a satellite to pivot from, Tone Ranger found himself surrounded by likeminded artists drawn to the Southwest for its feeling of creative possibility. Here a community of EDM producers are channeling a spirit of optimism catalyzed by Meow Wolf, a large-scale immersive installation in Santa Fe that attracts over a million annual visitors and is home to one of the most exciting music venues in the US.

Tone Ranger quickly emerged as a regular on the Meow Wolf stage and rapidly became one of the most in-demand EDM acts in the region with a fast growing reputation for his lively performances and irresistible euphoric music—a fusion of Americana and classic house. Always seeking to push the boundaries, Tone Ranger has used time in lockdown to dive further into the visual side of his work, performing to online audiences and livestreaming from old movie theatres framed by his films, which weave psychedelic imagery with contemporary dance and archival footage. He now kicks off a new series of live events at desert drive-ins in secret locations on the outskirts of Santa Fe.

Tone Ranger is also about to unveil a mammoth project titled Peaks & Valleys, a double-volume collection bringing together years of work, field recordings, and journeys into the wilderness. Peaks & Valleys manifests as performances, films, visual artworks, and recorded stories as well as EDM soon-to-be classics. He recently dropped two infectious new singles, "House Made of Sun" and "Don’t Let Go," the former of which channels a pulsing sun energy made with hand drums, whistling, and lap steel guitar while the latter is a swirling, mesmeric summer anthem for open air dancing and stargazing. His upcoming single features Americana singer Parker Ainsworth.

Tone Ranger rises from the landscape as one of the most exciting artists emerging out of the American Southwest, bringing a hypnotic and fresh sound that is guaranteed to entrance listeners. Pushing the boundaries of genre and presentation in his quest to awaken people to the importance of the land, his journey resonates with artists globally who are trying to shift humanity’s relationship to the natural world.

You can dive into the work of the extraordinary Tone Ranger on Spotify and follow his journey here.