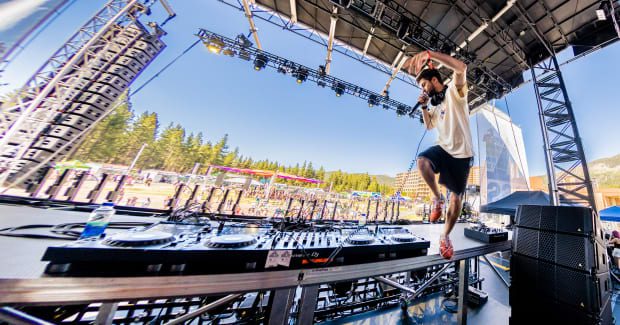 Haunting, visceral, memorable—what can be said of ESPER's music that can't be said of the supernatural?

The electronic music prodigy, whose real name is Max Margot, is experiencing quite a rise through the EDM scene. ESPER's name derives from the concept of extrasensory perception, or ESP, more commonly known as "the sixth sense."

No, he does not see dead people. What he sees is a bright future.

Thanks to the iconic 1999 film of the same name, "the sixth sense" is more commonly associated with the paranormal community. But for Margot, it's rooted more in psychology. One of the core values at the bedrock of his brand, he says, is empathy, as in he hopes his music connects with fans so their subconscious feelings bubble to the surface.

And it's this tenet by which he approaches his artistry, which has caught the attention of some of contemporary music's leading names. Take, for instance, "Medusa," a track released by leading electronic label Monstercat that explores our tendency as humans to fall prisoner to love we don't think we deserve.

There are only a handful of DJs who are able to say they've worked with Kanye West, but this young artist added that distinction to his résumé in 2022. ESPER was part of a cadre of producers, audio engineers and other musicians to work on Donda 2, Ye's 11th studio album. Working alongside Cardi B, Offset, DaBaby and more, he contributed to a slew of records from the LP.

EDM.com was recently on the ground at Bass Camp, the largest dance music fest in Tahoe, which also served as the home of ESPER's long-awaited debut festival performance. But you wouldn't have known it after seeing legions of ravers barrel in within a nanosecond of taking the stage.

ESPER's eerie, cinematic sound slithered into focus, functioning as a siren song that lured the crowd in like a moth to a flame. It wasn't long before he uncorked a teeth-rattling drop, a blend of euphoric bass and ominous dubstep that perfectly encapsulates his approach to dance music.

In the wake of his emphatic Bass Camp performance, ESPER touched down in Los Angeles for a DJ set at the famed Academy club, where he was billed alongside Grammy-nominated electronic music luminary ILLENIUM. His first-ever performance in the City of Angels poured gasoline on what was already a career simmering in a chrysalis of potential.

Next up is a run of tour dates with NGHTMRE, the bass music superstar fresh off the release of his scintillating debut album, DRMVRSE. ESPER is set to join him on his eponymous album tour, where he's set to unveil a bevy of new tracks.

You can find out more about ESPER and purchase tickets to his upcoming shows here.