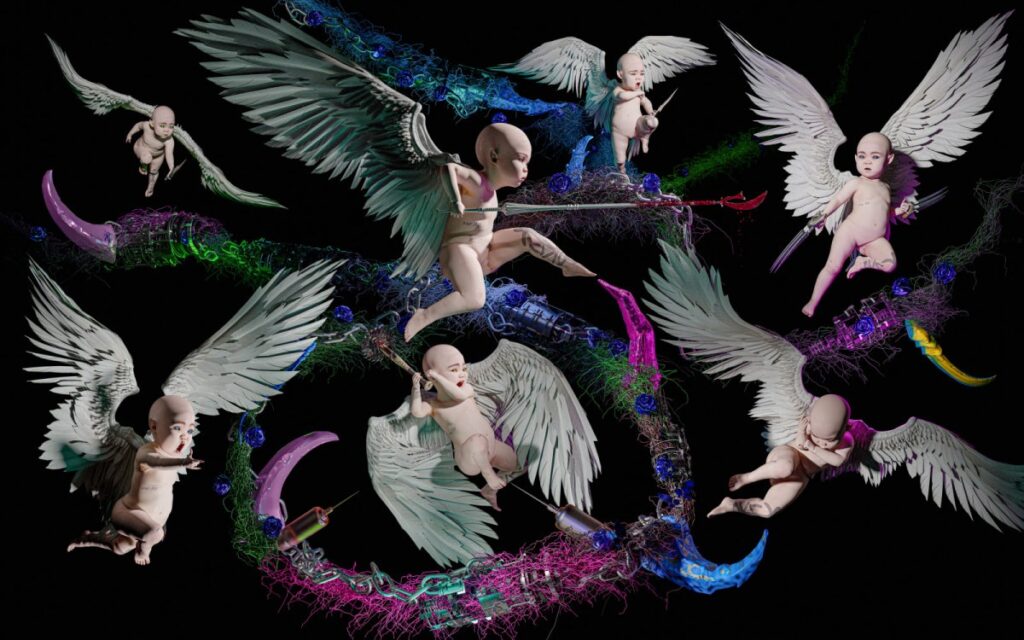 As the latest Bitcoin and cryptocurrency hype cycle has gripped investors and driven a whole new wave of adoption to the space, Duncan and Griffin Cock Foster find themselves at the epicenter. The twin brothers and entrepreneurs have helped spearhead a meteoric trend in the digital asset space with their company Nifty Gateway, a marketplace for digital art and collectibles called NFTs, or non-fungible tokens, which are collectible assets authenticated and secured by blockchain technology.

A few years ago, the idea of collectors purchasing digitally minted art pieces to the tune of thousands and sometimes even millions of dollars would have seemed ludicrous. However, as public comfort and interest in blockchain technology has only continued to rise, cultural influencers—especially musicians—have started to flock to embrace the trend in droves.

On February 28th, Nifty Gateway hosted one of its biggest auctions to date with the release of Grimes' mythological War Nymph art collection. Immediately prior to the high-profile release, Duncan and Griffin shared they were somewhat surprised by how quickly influential musicians have taken an interest in NFTs, but feel Grimes is a perfect case study for what they can offer someone with talents in both art and music. "I think Grimes is well-known as a musician but she also has a very impressive visual art career. I think NFTs are a really exciting medium for her because that's her background," Duncan told EDM.com. "It really brings together the audio and the visual together in a way that other artistic mediums just don't."

Therein lies the critical utility of NFTs. "For the first time you can make music part of an art object," he continued. "It's pretty hard to natively insert music into a painting or a sculpture, but with an NFT the music can actually be a pretty significant part of the experience for the consumer."

Grimes is just one artist from the electronic music world participating in the space already. Dance music artists were early on the scene with 3LAU, Gramatik, renowned visual artist Beeple, and more taking part in recent months. In Griffin's view, that is no mere coincidence.

"In my opinion, EDM artists are just the perfect fit for NFTs. They're very tech savvy and the demographics are very similar to the kind of people who are buying NFTs," he said. "They're well positioned to understand the technology because their careers are based around technology already. It's no real surprise they've taken to it like fish to water."

Though the NFT industry has seen a rapid explosion in interest, the founders recalled their humble beginnings just a couple years prior. "We started Nifty Gateway two years ago and launched the current platform just under one year ago," Griffin said. "When we launched it, we were cold emailing along with our business development rep Tommy, hundreds of people, probably thousands of people, and getting responses from fewer than 1% of them just pitching them on making NFTs. That was people who were far smaller than who is working on NFT's today. That was Instagram artists who maybe had followings of 50K or 20K… Now we're getting inbound interest from all the biggest DJs in the world."

In Nifty Gateway's first month of business, they closed $30K of sales. This month they are forecasted to do $6.6M, less than a year later. Between then and now, the twin brothers have seen several moments as transformative in their burgeoning platform's brief history, including Grimes' momentous release. "The first was when we did the Trevor Jones Picasso's Bull release last year. We'd had some success before, but that was the first time we saw NFTs sell out really quickly and there was a big bidding war." Jones' release ended up going for $55K, Duncan said. "I feel like the Grimes release will be history-making because it seems like people are really excited for it and the artwork is really strong."

While NFTs are still in their early days, Duncan and Griffin envision an incredible incentive for creatives to join the movement. They point out a tweet from Gramatik, whose recent auction on Nifty Gateway was able to replace an entire year of lost touring income due to the ongoing pandemic. Meanwhile, earlier this week, an NFT created by Beeple resold on the secondary market for an astounding $6.6M, a data point that strongly suggests the piece will be a collector's item capable of holding tremendous value long into the future.

While the numbers certainly speak for themselves, of course with any new technology there are skeptics. Some see NFTs as a fad lacking in the utility to command longterm staying power, similar to the Beanie Baby hype of the 1990s. "Everyone said this is just Beanie Babies 2.0, this is just a fad," Duncan recalled. "Certainly as with a lot of technologies people can get way too overexcited and overestimate the possibilities in the short term but then they underestimate the possibilities in the long term."

Other skeptics don't see how digital art can possibly command valuations that, in some instances, surpass those of real world art. "NFTs by default have perfect provenance," Griffin explains. "If I make a piece of art and try to sell it, the default is no one can really prove it was made by me. Justin Roiland, the creator of Rick and Morty, sold a drawing on eBay for $20K because [the bidder] knew it was coming directly from Justin Roiland. But when that person tries to resell it, they have to go through a gallery or auction house to verify it's authentic, whereas with NFTs' authenticity is the default."

Roiland later went on to tokenize a version of that same drawing he previously sold on eBay. The digitized version drew interest far surpassing its physical counterpart, and was sold on Nifty Gateway for $290K.

Ultimately, Duncan and Griffin cite a growing number of collectors, creators, and an increasing scale of transactions over the last couple years as evidence that this is just the start of a trend and technological shift. It's their belief that NFTs are here to stay for the long-run.

"Similar to how Bitcoin took off because it's such a clear improvement upon the current financial system, we think this is a very clear improvement on the ways musicians have to monetize, make money, and connect with their audience," Griffin affirms. "We really just thought it was a matter of time."