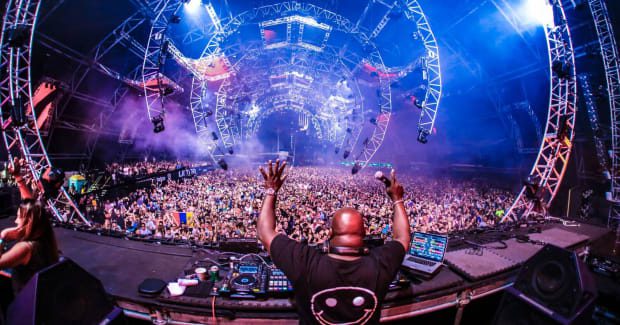 Iconic, breathtaking, indelible—what can be said about Carl Cox's music that hasn't already been said about Ultra's RESISTANCE Megastructure?

The legendary DJ is embedded in the mythos of Ultra, a festival that is as vital to rave culture as Cox is to techno. He's been throwing down in Miami for nearly two decades now, and the star of his legacy only grows brighter with each eye-popping RESISTANCE set.

There's no arguing the power of Ultra's Main Stage, but the immersive Megastructure is the festival's pièce de résistance. It's here where Cox has enraptured the nation's electronic music community since 2017.

But that wasn't always the case. Before it became a lynchpin of one of the world's largest dance music festivals, the Megastructure concept took years to develop. And after it finally debuted in 2011, the stage would ultimately become a tinderbox that ignited an epic ongoing saga—with Cox holding the match.

As Cox gears up for the release of Electronic Generations, his first album in 10 years and a Grammy frontrunner, we've pulled the yarn of his best RESISTANCE Megastructure moments.

After two years off, Carl returns to Ultra Music Festival Miami to debut the "Carl Cox & Friends" stage concept, marking the start of 16 consecutive years at the festival.

2011 | Bicentennial Park: The Megastructure is born

The festival returns to Bayfront Park, where Sven Väth makes his Ultra debut and his label, Cocoon, co-hosts the Saturday programming with "Carl Cox & Friends."

Adam Beyer plays b2b with his wife, Ida Engberg, at Ultra for the first time as part of "Carl Cox & Friends."

The RESISTANCE Carl Cox Megastructure debuts with Sasha and John Digweed reuniting for their global debut.

Carl performs three consecutive days for the first time ever, including a celebrated b2b set with Marco Carola.

The RESISTANCE Carl Cox Megastructure expands to three days for the first time ever at Bayfront Park.

Carl to play a b3b global debut with Jamie Jones and The Martinez Brothers, as well as a b2b with Maceo Plex as a global festival debut.