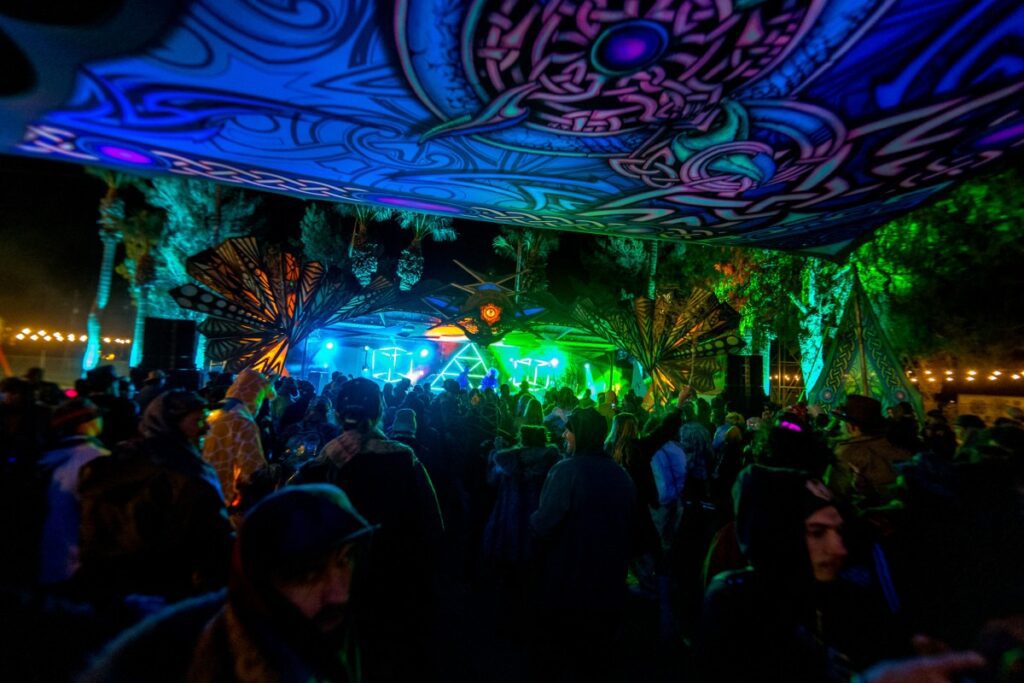 Under the swaying palm trees of Tucson, Arizona, Gem & Jam Music Festival shined through its 14th anniversary the first weekend of February.

The music, visual arts, and gem and mineral festival has been known to be a warm escape from much of the country's frigid winter weather, but over 6,000 attendees endured an unusual desert storm that sent chilling temps and blistering winds for the first two days. Thankfully, each day brought over 14 hours of live music, mindful workshops, and sparkly gemstones to keep attendees busy and bustling.

If you’re not already listening to Vincent Antone, you probably should be. Having made his Gem & Jam debut, this Austin-based producer took over not one, but two of the festival's stages.

Attendees were first introduced to the Pretty Lights-influenced artist with a Saturday sunset DJ set on the Opal Stage—and man, was it funky. Soulful hip-hop beats resonated from the stage as James Brown’s “I Got You (I Feel Good)” got an electronic makeover and Daft Punk’s “Harder, Better, Faster, Stronger” flung headlong into a funky bass drip.

“This festival is amazing," Antone said. "The energy is palpable, the scenery is incredible, and the people are beautiful. So happy to be a part of it!"

Sunday evening had tough performance conflicts for festival-goers, so if you weren’t over on the Quartz stage, you were missing out. Antone's hourlong live set on Sunday evening showcased his versatility and jamband influence for what would be one of the best sets of the weekend. Joined by powerhouse drummer Jose Gutierrez, Antone cycled through future-funk and bass tracks, including his recently released “The Good Stuff,” breaking out his electric guitar to pepper a thrilling spice to the bass grooves.

Time to update your playlists… The Sponges are coming to lay down some funky house beats for you.

While Sunday night saw SunSquabi over on the main Emerald Stage, a full-on party was going down over on the Quartz Stage. The Sponges gathered a large crowd for what would be one of the best parties of the weekend, throwing down their signature fusion of 70s funk, acid-inspired bass, and cheeky sampling into their hourlong set.

Sprinkles of the iconic MJ refrain "mama-say-mama-sa-mama-coosa" rained down as masses of people flooded the stage area to get down to The Sponges' signature brand of disco-inspired house music. And what would be a new-age, electro-funk set without some James Brown? Swirling bass radiated from the stage when the duo dropped an intoxicating remix of Brown’s "Papa’s Got A Brand New Bag," but not long before the crowd broke out into a full-fledged breakdancing party for the duo's anthemic track “Jerry Brain.”

For those who were waiting all weekend for Claude VonStroke’s headlining performance, SLiCK FLOYD dosed the Saturday crowd with a hearty mid-day house music set over on the Opal Stage.

The Phoenix-based producer returned to Gem & Jam for his second appearance after his 2020 debut to lay down all the "boots and cats." Danceable remixes of music by Maine, Daft Punk, The Weeknd, and more all got rinsed with FLOYD's own unique flair, making him a special "hidden gem" performance of the weekend.

It was a blustery first night of Gem & Jam, but Tripp St. offered fans refuge in the festival's indoor Onyx Stage. His 75-minute set gave way for his freeform bass and mind-bending synths.

While others thought Lab Group’s set was the highlight of Friday night’s bass, Tripp St. gave them a run for their money through his bouncy rhythms and organic hip-hop sampling. His 2021 anthem “Livin” earned a respectful nod from the crowd, setting the Onyx stage up in high spirits for rest of the weekend.

Thanks to Amp Live, Gem & Jam received a healthy dose of hip-hop-inspired dance music over on the Quartz Stage Sunday night.

Amp Live is chill and reserved, but his sound is anything but. Accompanied onstage by his drummer, he turned up with big throwdowns of music by The Grouch, Eligh, House of Pain, and even inspiring a singalong crowd chant for “The Power Of The People."

Stay up to date and find out more about Gem & Jam here.