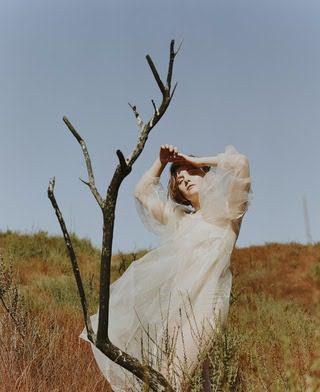 Rising songwriter, multi-instrumentalist and vocalist Kathleen shares a new track “Dark Side of the Moon” today—watch the visualizer, filmed by Kathleen during a roadtrip, here. The song is from her forthcoming EP Kathleen II, out October 9 via Let Me Know/Warner Records—pre-save it here.

“I wrote most of ‘Dark Side of the Moon’ on my drive back from LA to Colorado during the beginning of quarantine,” Kathleen says. “I drove alone, car packed up with my most precious books and journals and instruments cause I didn’t know when I’d be back. The highways were almost totally empty except for Walmart trucks and Amazon trucks and other little cars like mine, packed to the roof and all with license plates from different states. It was so subtle, but the more I noticed, the more we all looked like little ants returning to our primary nests. I became overwhelmed with the idea that this was the first time in recent history when we’ve had a mass migration home.”

“The visualizer is unfiltered iPhone footage I took on the drive back to LA some three months later. I wanted it to look ultra average, dirty windshield, things on the dashboard, kinda shaky, because I feel that if we look back on it in a few years, decades, it will launch us back to how the world looked and felt during this time. Like a visual time capsule I buried on YouTube. I wanted it to be in reverse so it felt as though I was being sucked back in time into a simpler life, from LA—my new home where I pursue my own lofty life goals—back to Colorado, my family’s home.”

Kathleen recently partnered with Klean Kanteen to create a custom bottle that features Kathleen’s own illustration of the Glacier Lily, a resilient flower found in the Rocky Mountains that often grows right through the snow, symbolizing the spring that awaits us after the quarantine winter. Kathleen will donate a portion of the proceeds to Indigenous ReGeneration, a charitable organization dedicated to the preservation and re-indigenization of Native Communities.“Dark Side of the Moon,” follows the first offering from Kathleen II, “August.”

Kathleen II, the follow up to her debut EP from May, finds the singer digging deeper into her roots as a poet and environmentalist, using the backdrop of the pandemic to heighten the urgency of the music and contrast the EP’s lighter moments. Kathleen wrote “Dark Side of the Moon,” the EP’s second track, at the beginning of quarantine when uncertainty and chaos abounded, inspired by “everyone running and hiding from this microscopic pathogen,” yet there is a tenderness in Kathleen’s voice as she prepares for a once in a lifetime opportunity to reconnect with her family. There’s a similar duality on “Can’t Sleep,” which finds Kathleen comparing the state of the world to a bad dream.

On one hand, it sometimes feels like the reality we’re collectively enduring would end if we just woke up, and on the other, the song is also about the worst nightmare of those in power—everyone uniting to affect change. The EP, which is in large part produced by Ariel Rechtshaid(Adele, Beyoncé, Vampire Weekend, HAIM, Kelela), references some of Kathleen’s favorite poetry and further highlights the precision of her voice and her devotion to nature, setting the scene for the rising singer’s next chapter.In May, Kathleen made her Warner Records debut with Kathleen I, which “takes strides toward defining a lane for Kathleen through her poetic and politically conscious songwriting,” according to Under the Radar. The EP features her debut single, “The Longest Year,” and three other tracks—stream it here.Born on an island in Washington and raised in the Rocky Mountains by a park ranger mother and a pediatrician father, alongside a sister with a degree in evolutionary biology, Kathleen finds her foremost inspiration in nature.

From the age of seven, when she began writing songs and poetry, she found herself entranced by the world around her, whether by the sweeping landscapes of her home state of Colorado or the pattern of leaves as a vine climbs a wall or the insects living in a fallen log. She grew up ski racing, but was always more interested in the great silence of the snow beneath the chairlifts and the total freedom inside the forests of the back bowls. Her work investigates these natural extremes and how they apply to our everyday lives.