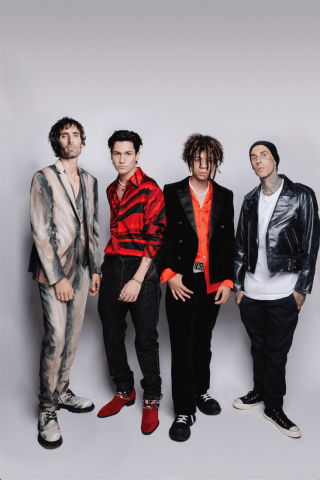 LILHUDDY says about the track, “I cannot explain how excited I am to put this song and video out into the world. I have been teasing the track and it is hands-down one of my proudest moments as an artist. iann, Tyson and Travis have been such inspirations to me, so being able to collaborate with them on ‘Don’t Freak Out’ was an absolute dream and I am so grateful for the opportunity.”

The music video for “Don’t Freak Out” was directed by Daniel Russell (Saweetie, Khalid, Missy Elliot, SZA, Justin Timberlake, Normani). Filmed at an abandoned factory, the video shows LILHUDDY being kidnapped by a mob of fans who strap him to the front of a monster truck cut with performance footage of LILHUDDY, iann dior, Tyson Ritter and Travis Barker.

In addition to the song and video, LILHUDDY announces his upcoming debut album Teenage Heartbreak. The album, which is set for release on September 17th, is available for pre-order now. Teenage Heartbreak will include Chase’s previously released singles “21st Century Vampire,” “The Eulogy Of You and Me,” and “America’s Sweetheart,” along with “Don’t Freak Out” Feat. iann dior, Tyson Ritter and Travis Barker, all of which will be available as instant-grat upon album pre-order.