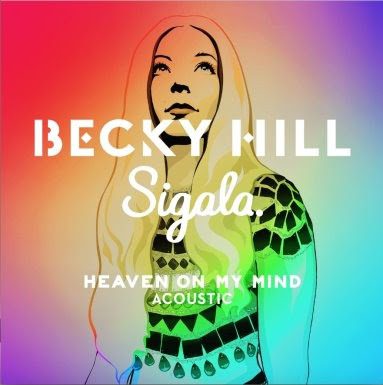 “Heaven On My Mind (Acoustic)” is available via Interscope Records HERE. Since its June release, “Heaven On My Mind” has seen Becky achieve her highest UK charting debut single to date and garner over 14 million streams.

The “Heaven On My Mind” live session, which showcases Becky’s unique, show-stopping vocals was directed by Dan Massie and filmed outside Alexandra Palace, London. The emotive stripped-down recording of “Heaven on My Mind” sees Becky accompanied by her Musical Director Aaron Williams on keys and her backing vocalists Paije and Lovelle, alongside guitarist Adam Rust, celloist Davina Shun and violinist Jennifer Coombes.

26-year-old, Becky Hill, is renowned for her vocal prowess. Becky has an impressive string of hits to her name, having written and performed on nine singles which charted in the top 40 of the UK official singles chart, including the recently released “Heaven On My Mind” with Sigala and “Better Off Without You” (which spent 5 weeks in the Top 20 of the UK Official Singles chart), the chart-topping, number 1, (“Gecko (Overdrive)” with Oliver Heldens) and two top 10 singles (“Wish You Well” with Sigala and “Afterglow” with Wilkinson). Over and above this, Becky has collaborated with the likes of Rudimental, Matoma, Lil Simz and Tiësto, while her songwriting skills have been enlisted by artists ranging from MK and Jax Jones to Martin Solveig. All this, in addition to launching her critically acclaimed podcast The Art Of Rave.