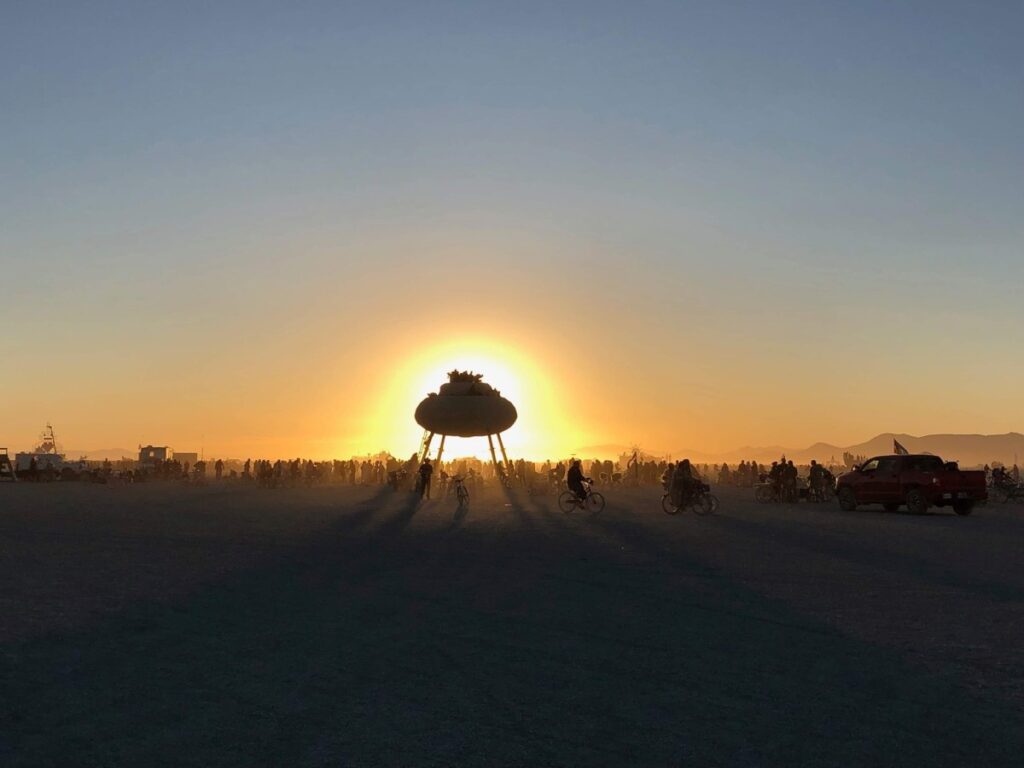 "Doing the same thing over and over is boring," says Jorge Perdomo, creator of The Fluffy Cloud.

No, The Fluffy Cloud isn't the name of a fancy new weather app or a pillow you saw on Shark Tank. It is a futuristic art installation that doubles as a formidable concert stage, towering 30-feet high and flaunting a 60,000-watt circular sound system and a dazzling centrifuge of 33,000 polychromatic LEDs. The Fluffy Cloud is a structure like no other, and that's the point—its goal, Perdomo says, is to disrupt the live entertainment industry by creating something that blurs the lines of art and music to offer a truly immersive experience.

At its core, The Fluffy Cloud represents subversion through immersion.

Inspired by his own experiences at concerts and EDM festivals, where he found dancing with his friends in open-air spaces more conducive to a comfortable partying experience, Perdomo knew he could create something "fundamentally circular, with no discernible 'front' that would lead to a musical experience that encourages more of these face-to-face dancing environments." He wanted to foster an experience that was devoid of a congested crowd, who are typically packed in like sardines and whose only goal is to stampede their way to the front. "I'm not sure how it came to me, but I almost immediately knew that, to do this, it had to be a cloud because a cloud is one of the few objects which can be generally thought of as never having any natural 'front' to it," he said.

The Fluffy Cloud's distinctive UFO-like shape lends to its status as one of the world's only 360° live performance spaces. It is also engineered to subliminally encourage interpersonal connections during shows, which is a phenomenon revelers are yearning for as they trudge out of the murky shadows of the COVID-19 pandemic.

The darkness of those shadows were especially daunting for the Cloud and its creator, Perdomo, who had planned a barnstorming world tour that was effectively throttled when the virus stomped its way through our festivals, stadiums, and concert venues, decimating them like André the Giant at an all-you-can-eat buffet.

"The Fluffy Cloud was designed to be able to tour from day one," Perdomo told EDM.com. "As special as an art project might be conceptually, at the end of the day, the truth is that if you want to keep sharing your art with people, you need to make that art self-sustaining, which for better or for worse means it needs to be financially viable. Art costs money—that's the simple truth. We had a busy schedule of 2020 bookings in place with both music festivals and what I like to call 'city residencies' where we come in as a pop-up venue, but just like everyone else in the live production industry, the coronavirus tossed us quite the curveball."

The live production and concert industries were hit especially hard by the pandemic, biting the metaphorical curb as countless festival brands, clubs, and venerated concert venues crumbled due to forced closures dragooned by public safety ordinances. However, the music community proved its resilience by cultivating a bevy of trailblazing experiences to uphold its vibrant spirit while complying with social distancing guidelines, like virtual music festivals, charity tournaments, and even drive-in raves. The sharpest swords are forged in the hottest fires, and The Fluffy Cloud is no exception.

"I believe creativity flourishes most not during times of clear skies and open paths, but when you are faced with constraints," Perdomo continued. "I have to admit that as the coronavirus crisis started cancelling or postponing all our bookings, I was pretty dismayed. But since then, I've become pretty hopeful and optimistic because in the face of these challenges, I've been forced to try to get creative and to think of ways where I could bring The Fluffy Cloud back into the world safely and responsibly. What has come from this brainstorming is a series of concepts wherein the Cloud's unique attributes can be leveraged to create safe entertainment spaces while still maintaining social distancing measures."

Before the pandemic popped the Cloud and shattered its rose-colored glasses, the installation was primed for touring domination. The Fluffy Cloud made its debut at the 2019 edition of Burning Man and turned heads with its stupefying production quality and jellyfish-like iridescence in the cavernous desert night. The occasion was one of great pride for Perdomo, whose inspiration for The Cloud was initially inspired by his experiences at the beloved Black Rock City festival in 2018. He says he "left the desert a changed person" and was imbued with a sense of gratitude and a newfound appreciation for the electronic music world, which ignited a fervid desire to return the favor.

What followed was a relentless barrage of requests from promoters and venue operators who clamored at the opportunity to feature the Cloud at their events, which led to its grandiose reintroduction at the prestigious Art Basel show in Miami Beach. The Fluffy Cloud's monumental appearances in Nevada and Florida, respectively, are a microcosm of Perdomo's overarching goal of establishing it not as a mere club, but as a "touring pop-up venue."

"Although my first love is still music, I believe there are many beautiful forms of art and experiences that can be hosted and uniquely amplified by the Cloud," said Perdomo. "As we showcased at Art Basel, the Cloud works great for all sorts of productions. We've hosted yoga classes, meditations, and even family-friendly sound and lightscapes. With the ideas we have in the works now, the Cloud might even become a temporary restaurant. Who knows?"

The beauty of The Fluffy Cloud lies in its versatility. Yes—it is perfect for an EDM festival—but that doesn't mean it should be pigeonholed. With its ability to appear at "a beach in Ibiza, a rooftop in downtown Los Angeles, or an abandoned factory in Beirut," Perdomo is confident in the Cloud's ubiquitous potential. "Our imagination is really the only limit here, which is why I think the most exciting way to think of the future of The Fluffy Cloud is as a really unique paintbrush," he said. "It is a tool that doesn't only have to be wielded by my hand, but that can be placed in the hands of other artists and producers so that anyone can combine their art with mine to create really captivating and magical new experiences that appeal to a wide variety of interests."

After the tragic cancellation of Burning Man's 2020 iteration, Perdomo found himself dejected, telling himself, "Man, there's like nothing to look forward to now." However, upon realizing his Cloud's capability to moonlight as a "lightning rod" for the community, he committed to organizing a non-commercial, post-quarantine celebration that would inspire resilience by rooting it in the "10 Principles of Burning Man." And just like that, Flaming Bird was born.

"A completely non-commercial participatory arts event, Flaming Bird will have no bars, no merchandising, no ticket sales, nothing," Perdomo exults. "Just like Burning Man, we have solicited the community to submit concepts for art installations and themed, camp-like experiences, and the responses have been fantastic. We have proposals for giant tesla coils, interactive murals, multiple art cars, pop-up bars, juice stands, grilled cheese stands, kid zones, no-kid zones, and so much more—just like Burning Man itself. The only place cash might come into play is if people choose to optionally donate to the Burners Without Borders program, which we are supporting as well."

It's important to note that Flaming Bird is in its early stages, and the logistics and details are not available at this time. However, when the event does take place, it will comply with public safety ordinances while working towards Perdomo's goal to "give our community something to look forward to that, hopefully, isn't so bleakly far away as Burning Man 2021."

Flaming Bird is also just the tip of the iceberg for The Fluffy Cloud, which represents a glimmer of hope not only for Perdomo and his precious art installation, but also for the music community at large. "There is still a lot in the works for 2020," he said." Our discussions continue with both local production partners as well as government officials as we try to chart a responsible path ahead, but we are committed to finding a way to get entertainment back in action in a safe and socially responsible way as soon as it is safe and practical to do so."